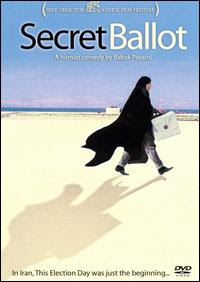 A soldier is patrolling an Iranian island to stop smugglers while his colleague has finished his shift. Just then an airplane drops a box for elections and a woman shows up informing him she is in charge of a commission that will collect the votes for the election of the inhabitants of the island. The woman and the soldier drive in a jeep in search for voters: they stop a running man, reach a truck full of women, hire a boat, have to talk a small village into voting and meet a old man with a solar station who only wants to vote for God. When they collect the votes, she leaves in an airplane.

Of all the minimalistic Iranian films, "Secret Ballot" is one of the most untypical ones by ironically pretending always to be typical. Everything in that film is the way the strict Iranian government expects: it's simple, quiet, "safe", has long takes, avoids getting controversial and portrays the country as kind and nice, yet the director Babak Payami subtly places secret, subversive messages that break those rules when you think about it. The simple story about a soldier and a woman in charge of collecting votes for the election on an isolated island is surprisingly funny, different and feminist: somewhere in the exposition, the soldier is expecting a man that will be in charge of the voting commission, but is surprised to find out when a woman shows up and ends up becoming his superior. She takes of her shoes, wipes the dust from her foot and proceeds to confidently prepare the box for elections. His comment: "A man must be in charge, not you" is sexist and actually displays the directors mocking at the patriarchal, atavistic mentality of (some) people in his country. Simple, authentic and sustained comical misadventures they get into are actually very amusing and authentic (in one scene, they drive a jeep and start chasing a man who is running away from them. The soldier catches the man because he suspects he is a smuggler, but the woman orders him to let him go because he must vote; a woman complains that a 12-year old girl is too young to vote, but "old enough to get married") and gently ridicule the traditions that don't make any sense. There is even one brave scene where an old man is refusing to vote because he "only votes for God", but the woman replies to him: "God is not one of the candidates". Nassim Abdi is wonderful as the charming, "strict" heroine, while the film doesn't seem extraordinary, but it would be a small shame if it was never made.