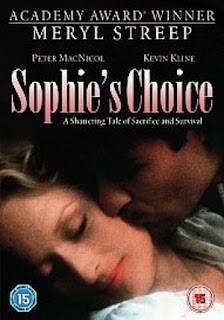 Stingo, a 22-year old writer from the South moves to New York in '47 and finds an apartment in Brooklyn. He soon meets two strange tenants living over his apartment; Sophie, a Polish immigrant, and her lover Nathan, a Jewish biologist. Nathan's mood changes frenetically - one moment he loves her, the other one he hates and degrades her. Stingo finds out Sophie is a Holocaust survivor - she tells him she was sent there because her father protected the Jews. But later on he finds out that's not true, and that in reality her father was antisemitic. Sophie then tells him the truth: she disagreed with her father and had a lover who was the leader of the Resistance. In Auschwitz, she had to make a horrible choice: who of her two children should be saved. She decided to save her son and let her daughter get sent to death. In the present, Stingo and Sophie spend the night together. But the next morning he finds out she and Nathan committed suicide.

Drama "Sophie's Choice" was received with praises from critics and audience, while Meryl Streep not only won several awards for her role as Sophie but also opted some circles to even call it "the best performance in film history". Streep's performance really is excellent - she speaks with Polish accent, she cries, she speaks German and Polish and in one sequence stars with her cut hair - but the best performances of all times always come from the best movies of all time - it doesn't matter how good an actor is if he or she star in only bad films. "Sophie's Choice" is by no means bad, but it is a deeply emotionally manipulative, calculative and one-dimensional film, which in the end reduces Streep's performance - she is an excellent performance in an inferior film. The first third of the film is the best - it neatly displays the main protagonist/narrator Stingo (excellent Peter MacNicol) finding an apartment in Brooklyn and getting puzzled by the bizarre love-hate relationship between Sophie and Nathan.

Pakula directs the film calmly and objectively, avoiding redundancies, but his structure is at times shaky - for instance, the small episode where girl Lesley pretends she loves intercourse and seduces Stingo just to in the end turn the tables and admit she she was just pretending, is simply pointless. Also, the film is at moments simply only fixated to cause pity towards Sophie from the audience, instead of transforming into an artistic achievement: for instance, in one scene Sophie is pale and asking the info man in the library if he can tell her where she can find a book from Emile Dickens, and he strictly and evilly responds that there is only Charles Dickens and that Emile doesn't exist. That causes her to fall unconscious. In another, the mad Nathan ridicules her and calls her a "Holocaust slut". As if you can hear the director say: "have pity with her, she is the scapegoat of the world!" The understated Holocaust portrayal in the last third is shocking, of course, even though Sophie has traces of misogyny for choosing to save her son and not her daughter from death, while the heavy soap opera, melodramatic touch reduces the tone of the film as the whole. "Sophie's Choice" is a good tragedy, yet maybe the extreme performances, like the one set in the Holocaust, are not equally good as the "normal" ones that still manage to touch the audience by simple skill and captivating talent.