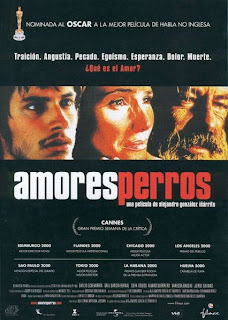 Mexico. Young Octavio lives in the same house with his brother Ramir who is violent towards his wife Susana and her baby. Octavio's dog, a rotveiller, once on the street in self defense kills a famous dog champion of the illegal dog fights, whose owner is Jarochito. Octavio lets his dogs engage into further fights, but gets into an argument with Jarochito and gets badly injured in a car crash...In the crash , Valeria looses her leg and can't work as a model anymore, starting an argument with her husband. Her dog disappears below the floorboard...El Chivo, a former guerilla man, now a poor old man, survives from payed assassins. Once he captures both his client and his victim to face each other. He adopts a dog and remembers his daughter.

Interesting directorial debut from Alejandro Gonzalez Inarritu, episodic drama "Amores perros", gained international acclaim and was noticed by many prizes: it won a BAFTA for best foreign language film, the Young Critics Award at Cannes and was nominated for an Golden Globe and an Oscar for best foreign language film. Inarritu's intriguing documentary style with shaky camera and static mood "sucks" the viewer in with ease and creates a rhythm that seems completely natural. In every of the 3 stories, connected by a car crash that gets shown 3 times from the perspective of the 3 protagonists, appear characters from the other two stories in small "cameos", Gael Garcia Bernal is especially great as the tragic hero Octavio, while the director's dry approach and gloomy mood seem authentic, like a natural Mexican Altman, before he went on to repeat the same old formula in his next movies and suffered from a "burn out syndrome". Some ideas are rather unusual (like the scene where Susana and Octavio start becoming intimate on the floor right next to her little baby), although some of them seem pretty absurd (Valeria's dog jumps into a hole on the floor and gets stuck below the floorboard for days, howling every now and then), while the leitmotiv of dogs that change the character is sympathetic - it seems Inarritu finds the effects of those pets almost therapeutic. But the third segment, where the hit man Chivo captures both his victim and his client who wanted him eliminated, because they are half-brothers, is a nice little twist on the assassin genre. "Amores perros" could have been better, but it's a touching and fluent hero of cinema: it became famous even though it was not made in the US.