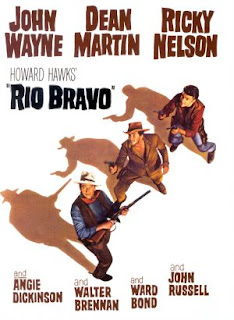 John T. Chance is a Sheriff in a small Texas town. One day he arrests criminal Joe Burdette for murder and puts him in prison where he guards him with the drunk Dude, teenager Colorado and limping old man, Stumpy. But the situation becomes a race with time since Joe's more dangerous brother, Nathan, secretly sends his outlaws to try to free Joe. While Chance waits for the arrival the U.S. Marshall to pick up Joe, he falls in love with the girl Feathers. The outlaws constantly challenge him and in the end even kidnap Dude demanding an exchange for Joe. But when they get exchanged, Dude attacks Joe and Chance eliminates outlaws in the chaos.

The best western of 1959, and for many one of the highlights of Howard Hawks' career, "Rio Bravo" is an untypically cheerful and funny film full of relaxed style that at the same time works both as a comedy as well as a parody of "High Noon": while in that film, the Sheriff refuses the help of a drunk and an old man, here the hero accepts them, since he needs all the help he can get. The story follows Hawks' often themes: friendship, comradeship, loyalty, overcoming ones own weakness and building up your own self-confidence. One especially needs to mention one meticulous action sequence that encompasses all these motives in one: after a shootout with an outlaw in the dark, who escaped, Chance (John Wayne) listens to alcoholic Dude (Dean Martin) who wounded the villain and has seen him hide in the saloon. They conclude they will recognize the said bad guy by his muddy boots. However, all the guests in the saloon have clean boots, and thus Dude starts doubting himself, while a prankster humiliates him by throwing a dime to buy for himself a drink in a spittoon. However, just then, Dude notices how blood is dripping into a beer cup on the counter, coming from the boots of the outlaw who hid himself on the roof. Dude then shoots the bad guy, who falls down, and regains his self-confidence—even forcing the prankster to pick up the dime from spittoon himself.

His mini character-arc in this sequence works almost as a magic trick. Unusally, in contrast, Wayne's protagonist Chance has no character arc, he is the same guy from start to finish, yet this also works thanks to some of his charismatic dialogues ("I don't like your men watching us, trying to catch us with our backs turned. And I don't like it when a friend of mine offers to help and twenty minutes later he's dead!"). Honest, simple and completely free of cliches, with excellent actors who, although slightly too long, offer fine fun, despite some ocassional flaws (the anti-climatic finale; the last two minutes are just a convoluted "fan service" to have Angie Dickinson stand in a corset for no reason). Even western haters will have a treat since it offers a universal, cozy theme of disparate characters—united by a sense for humanity and honor—who work together when trapped, to save their small place from a siege by villains who outnumber them. It's unbelievable how such a simple set-up can be so clever, fluent and timeless, once again proving Hawks is a talented director, a one who uses a simple, but effective 'old fashioned', classic style that places characters and the plot in center stage, and not cinematic techniques. "Rio Bravo" is today rightfully considered a classic. A few years later, Hawks made similar remakes of this film, "El Dorado" and "Rio Lobo", that became his last film.