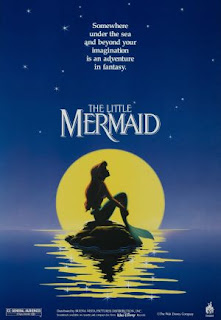 Ariel is a 16-year old mermaid, the youngest daughter of Triton, the god of sea. She misses a concert in which she should have sung because she went to collect human objects on a sunken ship. Crab Sebastian gets the assignment to observe her and is shocked when she saves the life of a human, Eric, who almost drowned, and falls in love with him. In order to become a human herself and seduce Eric, she makes a contract with witch Ursula and sells her voice. Ariel, now mute, tries to make Eric fall in love with her. Ursula, though, cheats and becomes the new ruler of the sea. But Eric kills her with a ship and marries Ariel.

No Disney girl was ever so deeply in love as it was Ariel in their animated version of Hans Christian Andersen's "The Little Mermaid". Most virtues of the film are drained precisely out of thoroughbred presented love story in which the strong and independent heroine sacrifices herself to gain the love of her life: so beautiful are the scenes in which she observes Eric from a long distance and sings how "something is happening now" and how he will "one day be part of her world", whereas her facial expressions are meticulously drawn by classic animation and perfectly conjure even her smallest gestures and emotions (her silent smile while the seagull is standing on her leg and does not know what is "different" about her or her reaction to Sebastian who wants to return back to the sea and report everything to her father). Despite childish humor and thin character development, her persistence is so enchanting that the first half of the story is excellent, but the second one stumbles—quite simply, since Ariel had such a great voice, it was a shame to make her mute for the entire second half of the film, when she is a human, which unnecessarily inhibits the story. The increasingly intimate relationship between Ariel and Eric is disrupted hectically with fillers (too many unnecessary scenes such as the one where Sebastian is getting chased by a cook etc.) and by ellipses, while the rushed finale is even more chaotic than the one in "Aladdin". Still, "Mermaid" is indeed an refreshing Walt Disney movie that rejuvenated the studio, while the legendary song, "Under the Sea", is perfect, but due to the weaker second half it still does not reach the grasp of such masterworks of romantic animation, like "Maison Ikkoku".