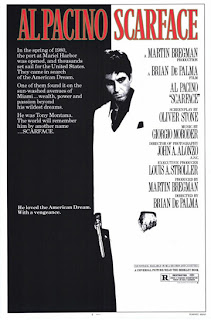 Florida, early 80s. Cuban immigrant and criminal Tony Montana and his pal Manny manage to get to the American soil and get green cards by killing a troublesome Communist. At first they work as dish washers, but they quickly find a job in the criminal world by working for mobster Frank and his girlfriend Elvira. After making a deal with the Colombian drug dealer Sosa, Tony starts rising in the hierarchy and kills Frank, takes over his place and marries Elvira. But the greed starts destroying him: he is accused of tax evasion and refuses to kill some journalist for Sosa. As a revenge, Sosa's men kill him.

Nominated for 3 Golden Globes (best actor Al Pacino, supporting actor Steven Bauer, score), cult crime drama "Scarface" is one of Brian De Palma's 5 best films that is, despite it's long running time of 170 minutes, extremely dynamic, fascinating, gripping and multi-layered, displaying a story about an outsider, Tony, a Cuban immigrant, who tried to blend in into the new society and become someone, but didn't make it. The characters of Tony and Manny are all a bunch of primitive hillbillies (in one scene, Manny says: "I would like to produce my own brand of pants, so that all women would wear my name on their butts!") but with time they change, whereas it seems as if the story is creating a moral balance - in one sequence Tony's mother tells her son that he is a "real animal and gives Cubans a bad name". In the other, Tony is taking a bath in his gorgeous mansion, rich and successful, but alone, abandoned by Elvira and Manny due to arguments, as if the story is sending the message that all the material values and big luxury can't replace all the small moments of spirituality and friendship. Virtuoso told, raw tragedy with a few minor flaws, almost equal to Scorsese's "Goodfellas".