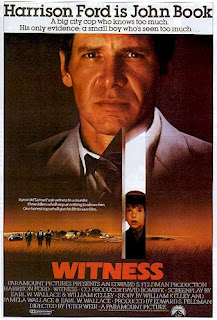 Pennsylvania. An Amish community is at the funeral of Jacob, who left his wife Rachel and little son Samuel. She and Samuel take a trip to Baltimore, but their train is delayed and they have to wait at the train station in Philadelphia. Samuel goes to a bathroom and accidentally sees a cop getting killed by two people. The police arrives and Captain Book questions the little boy, who quickly identifies one of the killers as Lieutenant McFee. Book is shocked to find out not only McFee, but his superior Schaeffer are involved in selling drug material after a raid. Sensing they are all in danger, Book hides at Rachel's home and tries to blend in with the Amish, even though he falls in love with her. Schaeffer finds him, but gives up when hundreds of Amish people show up in front of the barn.

Besides "The Truman Show", "Witness" is Peter Weir's best film: despite the first impression that it is moving inside conventional Hollywood formula, the story is actually incredibly fresh, original and clever, and the director leads it by crossing evenly from one genre into another - from a thriller into a drama and into a psychological "fish out of water" plot - and in doing so his characters are always spot on. Even though it is a mild thriller, the story is more concerned with portraying the Amish community and their introverted mentality and placing it in contrast with the typical extroverted culture of the West, thus the whole film is rich with many neat little details: in one scene, a breeze is waving the tops of the stalks of grass, making it seem as if a wave is sweeping through the meadow. An Amish horse carriage is too slow for a highway and causes a traffic jam. And in one especially memorable moment, police officer Book invites Rachel and the little boy Samuel in a restaurant by ordering three hot dogs: when the waiter brings them their food, Book simply takes a bite without any thought, but then he's surprised and even a little bit ashamed when he spots that Rachel and Samuel take their time to politely make a prayer and thank God for the hot dog before they eat, which subtly wraps their different mentalities in a nutshell.

The story is constructed so neatly that every detail completes the other and makes the film complete in general: officer Book needs a wife, traditional values and someone to protect, while Rachel needs a husband, spontaneous liberty and is in danger, thus making them a perfect couple of opposites that attract. In scenes where Rachel is visibly shackled by too rigid laws about relationships in her community, Weir doesn't remain due to criticize them and emphasize the universal law of love, but he never goes beyond that and shows deep respect towards some norms of Amish people. That's mostly referring to the moral, pacifist tone of their culture and a sense for comradeship. In one rarely mentioned scene, grandfather notices his grandson Samuel is fascinated by Book's gun, so he places the weapon on the table and says to him: "This gun of the hand is for the taking of human life. We believe it is wrong to take a life. That is only for God. Many times wars have come and people have said to us: you must fight, you must kill, it is the only way to preserve the good. But Samuel, there's never only one way. Remember that". Truly, after so many films that place action first and morals second, it's nice to see film where respect and ethics are prime target of thought. Even the ending shows that when there are simply too many witnesses, one man of evil can't do what he wants to anymore. Harrison Ford is excellent in the leading role.