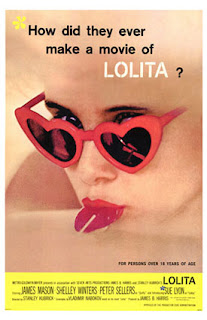 Writer Humbert Humbert shoots Quitley, a playwright. Four years earlier: Humbert becomes a tenant in a house of a middle aged widow Charlotte and falls in love with her 14-year old daughter Lolita. Lolita often fools around with boys so Humbert decides to marry Charlotte to stay near her all the time. She reads his diary and finds out he loves Charlotte, thus running out of the house and getting killed by a car. Humbert picks up Lolita from her camp without saying her about the accident and spends the night with her in a motel. Quitley spots them there and goes on to have an affair with Lolita and give her roles in his plays. He picks her up from the hospital and disappears. Years later, Lolita contacts Humbert again and informs him that she married Dick. He gives her all his money and goes on to kill Quitley.

After tackling the themes of greed, pacifist critique of authority and struggle between classes, Stanley Kubrick made another film with a tricky subject - pedophilia. Already the sole exposition of "Lolita" is genius: the main protagonist Humbert (very good James Mason) is searching for Quitley (comedian Peter Sellers, nominated for a Golden Globe as best supporting actor) in a mansion, until he stands up from a sheet shouting: "I am Spartacus! The leader of slaves" - which is coincidentally a nice inside gag to Kubrick's previous film. Then the half-drunk Quitley nonchalantly plays ping pong with Humbert until he draws his gun, causing him to comment: "You're a sore loser!" Humbert shoots at the picture of a woman behind which Quitley was hiding, and then the story goes into a regression with a title saying: "4 years earlier". This 150 minutes long film is truly a little bit too long and the tricky subject from Vladimir Nabokov's book with the same title was obviously watered down and censored for the conservative '60s, but Kubrick carefully and meticulously builds the controversial relationship between the middle aged Humbert and the 14-year old Lolita who even end up in bed at some point, but the camera never shows it, and there are many fine details present (while attending a screening of a horror movie, both Lolita and her mother Charlotte take Humbert's hand, but he only takes Lolita's). In a strange way, "Lolita" doesn't seem quite like a real Kubrick film - his visual style is slightly underplayed and instead of misanthropy the story seems to be having compassion and understanding for it's tragic hero. It's a cruel, vicious, but towards the end calm and touching ballade. Sue Lyon, then only 15 years old, brilliantly portrayed her role of a teenage girl, and won a Golden Globe as best female newcomer.