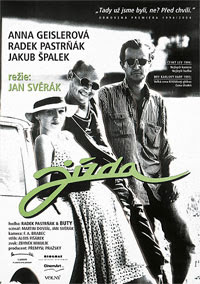 Radek and his friend Franta buy an old car for 8.000 Krunas and cut of it's roof to look like a cabriolet. They decide to take a trip through Czech republic and on their way observe houses, people, turkeys and nature. They meet an old lady and drive her for only 20 yards to her friend. Later on they also meet the blond Anna and give her a ride even though she doesn't seem normal, and on top of all she is chased by her jealous former boyfriend in a black car. The trio stops at a lake to take a swim and visit a meadow, while Radek gets attracted to Anna. She suddenly disappears but also reappears and spends the night with them in a hotel. In the end, Anna returns to her boyfriend and dies with him in a car accident.

Before Jan Sverak directed the famous film "Kolya", he made a rather boring and monotone road movie, "The Trip", which is plays out inside overstretched 90 minutes of running time and contains only 3 protagonists. That wouldn't be a problem otherwise, since even the smallest human emotions have their spark, but here it seems the whole film was heavily improvised and didn't have much to offer. "The Trip" has good actors - Radek Pastrnak and Anna Geislerova stand out - and neat cinematography, but suffers from a lethargic story in which nothing happens: Radek, Franta and Anna just drive and drive and drive in their car until they don't know what to do anymore, while they visited the whole Czech republic in the meantime and thus created a nice little postcard. Truly, when somewhere towards the end they finally reach a nuclear power plant, a monastery and then break up into a foreign house, it seems the movie didn't have anymore ideas what to do. Their dialogues don't have any humor or spirit at all, thus the best scene is at the start when a salesman offers the heroes the worst car without an engine.