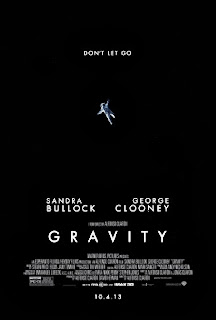 When a satellite is blown up and destroyed, its debris flies across the space as fast as bullets and crosses paths with a space shuttle in orbit. The only two survivals in the commotion are astronaut Kowalski and biologist Stone, who was catapulted away into space. Kowalski manages to save her, but on their way to the International Space Station (ISS), he is only able to secure her arrival there, while he is lost in space. Inside the ISS, Stone enters and starts a capsule in order to fly to the nearby Chinese space station, hoping to enter it and get back to Earth.

Alfonso Cuaron's "Gravity" is a bravura directed movie about space: the way he handles the camera and mise-en-scene in space is incredible, how he is using locations and areas, perspectives as well as frame set-up in order to tell the story is almost unrivalled in the modern cinema of his generation. The whole film is just about two characters in space - and that is enough for Cuaron to create a minimalist 'kammerspiel' that does not need anything more. At least three sequences are fantastic - one especially memorable is the one where Stone is crying while her tear is floating at zero gravity - but what is even more incredible is that he even manages to use his long takes without a cut in space, noticeable already in the amazing 14-minute opening scene of the space shuttle in orbit. Cuaron even stayed faithful to realism because there is no sound during explosions in space, a temptation that 99% of all movies of the space genre are not immune to. He has a remarkable visual style, gives interesting observations about the relationship between humans and the universe, yet also manages to create an emotional, unassuming little story about the heroine, Stone, who at first does not intend to survive but slowly becomes a symbol of tenacity of life. The only bothersome flaw are the last 15 minutes that simply had too much of an overkill of over-dramatization - it is like there is no end in sight of what impossible ways anything can go wrong for Stone - which slightly reduces the overall impression. Still, even with it, this is a shining film, Sandra Bullock is excellent and carries half of the story all alone, though George Clooney is great as Kowalski as well, which ranks "Gravity" among the classics of Sci-Fi/space genre, such as "2001: A Space Odyssey", "Legend of the Galactic Heroes" or "Queen Millennia".