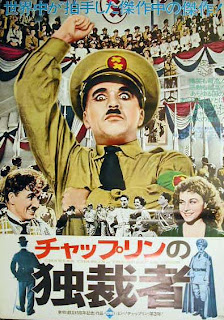 During the First World War, the Jewish Tramp was fighting for his homeland Tomania, but it lost. After a decade spent in a hospital in coma, the Tramp suddenly wakes up and returns to his job as a barber, but he is shocked to find out that the country is now ruled by the dictator Hynkel who hates Jews. The Tramp makes friends with a girl called Hannah, but is arrested and sent in an concentration camp. Hynkel invades Osterlich, where Hannah has fled to. But the Tramp looks remarkably like Hynkel - one day, the soldiers arrest Hynkel and mistakenly place the Tramp as their leader. In front of a mass of soldiers, the Tramp makes a speech about humanity.

Unusual satire "The Great Dictator", once declared as the best film of all time by the New York Times, was a brave polygon for Chaplin's first speaking role in a sound picture, and was nominated for 5 Oscars (best picture, screenplay, music, actor in a leading role Charlie Chaplin, supporting actor Jack Oakie). The film is charming, sharp, funny and touching at the same time, yet also full of dark allegories. The story is an obvious, unprecedented parody of Adolf Hitler and contains a lot of subversive ideas: the Third Reich's minister of propaganda Goebbels is here called Garbitsch. Hynkel is an incompetent clots who always trips unto something. But Chaplin also added a balance with his Tramp who also has a few "universal" gags, not only political ones: the whole story is extremely stylish, Chaplin's gags are meticulously graded and executed and almost every gesture or movement is orchestrated like a good ballet.

Just take the scene where the tramp is on the battlefront and gets an order to throw a hand grenade. He wants to throw the grenade, but it falls down his sleeve. The way he gets in panic and quickly removes his clothes is something so hypnotically funny it has to be seen to be believed. The same goes for the scene where the stromtroopers paint the word "Jew" on the store, but the Tramp pours the paint on their face: when Commander Schultz arrives at the scene of chaos, he calls the 1st in command, but when he spots the man's face is semi-covered with paint, he calls upon the 2nd in command, but the latter has even more paint on his face. The biggest problem of the film are its last half an hour which lost it subtlety and became banal and clumsy (the food fight between Hynkel and Mussolini clone Napaloni), but as a whole this is still an underrated masterpiece, a movie and a message with a soul—nothing compares to the brilliant idea that the evil antisemitic Hynkel and the good Jewish Tramp look exactly the same. It is practically a clash between two worldviews of the two most famous people at that time, the Tramp and Hitler, who symbolize a clash of innocence and evil. The implications are obvious—the dictator is persecuting himself,  everything can be divided into yin and yang, and—most unsettlingly of all—just a tiny difference in their life experience can make two identical people grow up into completely polar opposites. The Tramp's final speech about humanity ("Only unloved ones hate...") is a metaphysical wonder since it places him as Hynkel's good half. Full of wisdom, spirit and magic, "The Great Dictator" is Chaplin's only truly great sound movie—and his only one that surpasses all of his silent movies.