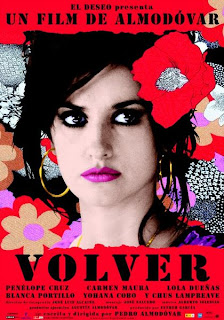 Raimunda and her sister Sole go to visit their old aunt Paula, who lives alone in a huge house. When Raimunda's husband tries to rape her daughter Paula, she kills him in self defense and Raimunda decides to dispose of his body, at the same time putting efforts to take over the charge of a restaurant. Soon, she also gets informed that aunt Paula has died. After the funeral, Sole's dead mother Irene appears to her, claiming she hasn't died at all, but that she actually found her husband sleeping with another woman and put them on fire, making everyone wrongly assuming for years that she has died with him. Sole hides her in her apartment. When Raimunda discovers she is alive, she is angry at first, bu eventually decides to forgive her. Irene admits she is guilty since she never noticed Raimunda was raped by her father and had a daughter with him.

"Volver" is an sympathetic film from Pedro Almodovar that seems more like an experiment then a film that can be pinned down under any genre, elegantly playing with such dark themes as incest and death, but strangely sustained and tame for his taste. From the opening shots in which a bunch of women are cleaning graves on the cemetery, the movie establishes a very feminist touch - almost every protagonist is a woman, while men show up only here and there is small supporting roles or get killed - which gives the relaxed story a refreshing tone, and Penelope Cruz (nominated for a Golden Globe and an Oscar) is absolutely unbelievable in her role: she is fresh, unusual and has a tight, sharp role reminiscent of Loren's "La Ciociara", and apparently she wore some sort of a prosthesis for her butt. Almodovar directs the film very calmly, even adding fantastic elements in the second part that turn out to not be fantastic at all (the "dead" mother returns to her daughter and explains that she never died in the first place). Some scenes are very bizarrely cute, like the one where Raimunda was sitting on the toilet until she sensed a "familiar" smell, a fart from her mother, then going to Sole's room where her mother was hiding and where they all started to laugh, and the story is very fluid but thin and it seems the director's classic sense for extravagant was reduced to it's minimum and rather watered down. "Volver", a cheerful movie some have characterized as Almodovar returning to his roots, is a soap opera for intellectuals.