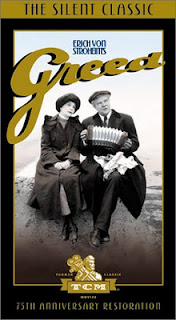 A former miner, brute McTeague, becomes a dentist in San Francisco. One day, he falls deeply in love with one of his patients, Trina, who is the girlfriend of a certain Marcus. When McTeague tells him about his love, Marcus decides to generously "give up" on Trina. However, he regrets it when Trina wins 5,000 $ on a lottery. She and McTeague get married and move to a new house. Still, despite her fortune, she turns out to be a real penny poacher and refuses to give anything to McTeague after he loses his license as a dentist and can't find a job. He steals 450 $ from her and runs away. On Christmas, he returns, kills her and takes the rest of the money. He returns to the mine and then flees to Death Valley where he meets Marcus again who wants the money. McTeague kills him, but stays handcuffed to his corpse.

Greed has always been a great source of inspiration for movies and novels, whether it is the central theme in the dramatic "The Treasure of the Sierra Madre" or humorous novel "L'Avare" by Moliere, probably because of the sheer intensity of characters found between it that collide with huge intensity. Just as the anti-hero McTeague was obsessed with it in "Greed", director Erich von Stroheim was in equal measure obsessed with greed for perfection found in overlong running time of the movie - seven hours are truly too long to sustain the viewers' concentration, even in such a great classic. Von Stroheim's greed was outmatched only by those of the producer's for profit who cut the movie to only 2 hours, yet the 4 hour version was restored and can be today compared.

The ideal movie would probably lie in the middle - some subplots in the extended version are unnecessary (Zwerkov and Maria, for instance, who are just there to foreshadow what is going to happen to McTeague and Trina) yet von Stroheim shows remarkable sense for "proper/inner" directorial skill in meticulous details (the minute the brute McTeague exits the coal mine but stops to pick up a bird on the ground and kiss it, he is able to reach the viewers), just the right balance of delicious emotions, which are neither too cold nor to sappy (i.e. the scene where bride Trina clings to her mother because she is afraid to spend her first night with her husband alone; the detail where she buys him a present, a giant golden tooth) and even slightly provocative-subversive ideas for those times (the legendary scene where dentist McTeague kisses a tranquillized Trina, who was still only a patient to him; the obsession with money over love/human relations as a critique of capitalism) all revolving around the story where instead of a couple consuming money, it consumes them. "Greed" is surprisingly dark and bitter even today, entirely opposite to many sugary movies of the 20s, a raw, existential allegory on selfishness, bravely tackling the "unpopular" Hollywood theme of lower class, with the expressionistic finale in Death Valley remaining an unforgettable example of "black ending", which is actual even in our time, and the repeated McTeague's line "You won't make small of me!" is brilliant.