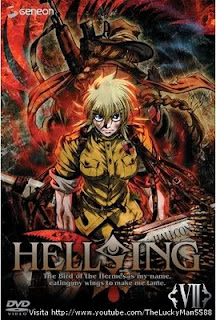 United Kingdom. After police officer Seras Victoria falls as a casualty to a ghoul, vampire Alucard abides her wish and "saves her" by transforming her into a vampire herself, recruiting her to fight in the Hellsing organization - led by Lady Integra - against those vampires that threaten humans. However, they get in the middle of a huge battle involving a neo-Nazi Major who uses SS-vampires to level London to the ground, on one side, and the Iscariot organization, a catholic fraction led by Vatican and priest Anderson, who fight against all three: Nazis, protestants and vampires.

The 2001 anime series "Hellsing" was a success, though it "amputated" the main tangle in the manga and thus caused complaints by fans, so a new creative team decided to "remake" it five years later with the "Hellsing Ultimate" OVA series that is more aligned towards Kouta Hirano's original work. Unfortunately, in this edition "Hellsing" went on the way of "Fist of the North Star": it dropped the mood in favor of splatter and (sometimes cheap and banal) violence which went way overboard. It is difficult to pin down why this OVA is so ephemera and convulsive when it has so many things going for it: the main tangle, for instance, intact in this edition, is unbelievable by revolving around a Major who "rebuilds" a new Nazi force in order to continue there where it ended after the World War II and his Blitz part II against London is a sight to behold - the scenes of Britain's capital getting demolished and burned in flames are a rare spectacle of the bizarre without limits. Some expressed worries against such a neo-Nazi "revisionist" story, yet it clearly distinguishes them as the bad guys. As a matter of fact, the sole subtext is subversive since one of the themes in "Hellsing" is the relativity of evil: Alucard is a vampire, but when his evil force is used for good, then it is acceptable. All three sides in the conflict have an evil side to them and the question is thus whether a goal can justify any means. Alucard himself puts it nicely in one episode: "A monster fighting for God. And a monster fighting against God. That's all the same."

The animation and character designs are top-notch, yet since the production is slow and it takes sometimes up to a whole year for a new episode to show up, the mood is uneven since the authors constantly have to remember to "pick up" there where the previous events left - after all, you have to expect a toll for consistency for a series whose production was stretched to half a decade, yet it plays out in only two nights - whereas the long, absorbing takes of standoff do tend to seem hesitant after a while (the 6 minute long monologue of the Major in one episode is truly too long), not entirely managing to recreate that desired Leone touch. Seras actually comes off less developed in this OVA: in the first "Hellsing", the authors took their time to show her struggle with becoming a vampire, while here everything was already consolidated in the first episode. For instance, the scene in the first anime where Seras tackles and immobilizes Jan had weight because it was so real, while here it seems too neat (also, her yellow uniform does not suit her so well). The best ingredients were again found when the story went into some absurd-caricature spheres, which were there to relax from the otherwise bleak events (in the closing credits for episode 4, the Major and the Doc show up wearing anime shirts, singing in a karaoke and having tourist equipment when they go to England!). "Ultimate" is more faithful to the manga, yet that does not automatically mean that is superior than the first "Hellsing" - the Fleischer brothers "Gulliver's Travels" is, for instance, quite unfaithful to Swift's novel, but it is still superior than the loyal '96 miniseries of the same title - therefore, these two do not necessarily contradict each other. Despite some genius ideas, "Ultimate" crammed so many bloody violence that it numbed the viewers, and ultimately the whole viewing experience.