Who's That Singing Over There? 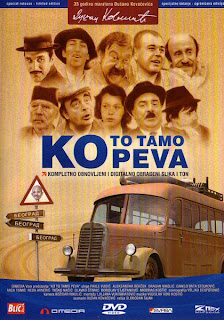 Serbia, '41. Two gypsies are singing how they would want the "whole world is just a dream", and then they go off to the local bus station in the middle of a countryside. A couple of other passengers, among them a hunter, a singer, a distinguished gentleman Brka, a sick man and a war veteran, are also waiting there for the bus that's going to take them to Belgrade. The bus arrives and they start their journey. The conductor's name is Krstić, while his son Miško is the driver. On the next bus stop thy take a freshly married couple with them. But their journey is full of troubles: they have to make a detour due to a military blockade, the bus gets a flat tire and an old bridge turns into an obstacle. Just as they were about to enter Belgrade, the passengers accuse the gypsies of stealing and the Nazi airplanes start bombarding and destroy the bus. Only the two gypsies survive.
In 1980 the Academy decided to give the award for best foreign language film to "Moscow Does not Believe in Tears", but it would have been much more fair if their voters did not completely ignore the excellent comedy "Who's That Singing Over There?" from Serbia, the only great film the director Slobodan Šijan ever made. Who would have thought that the best film in the history of Serbian cinema of the 20th century would revolve around - a bus trip? But it does. This amusing satiric road trip about the misadventures of passengers traveling in a bus is conquering the viewer by it's simple, completely authentic and spontaneous, fresh, sometimes raw charm with a regression of two kid gypsies who sing their song from time to time, looking directly into the camera. It's a completely simple film, subtracted of any kind of complicated visual style, norms or meta film gimmicks, seemingly like a normal comedy, but full of wise observations, social commentaries about the human mentality, a tragic ending and a humane touch, suitable for viewing for everyone.
The bus represents the Yugoslavia in small - it's a world for itself, showing how people from different areas interact, and ironically almost none of them has a job, which can be interpreted as a social critique. The story from Dušan Kovačević is full of hilarious jokes: a man shows up sitting at the very end of a donkey, the bus stops to pick up two live pigs for the conductor in the trunk and in one scene it is forced to drive through a farm field. But the best job was done by the brilliant, underrated comedian Danilo Stojković, here playing the distinguished gentlemen with a moustache, Brka: in one scene he joins every passenger on a hill secretly observing the married couple making love in the forest, saying: "They should be ashamed of themselves"! Someone replies to him: "But they don't know that they are being watched!", on which he adds: "Well...still"! Later on, when the passengers offer him to sit on the chairs of that same couple, he refuses, adding: "You showed who and what you are"! A cheerfully-silly masterpiece that it wasn't intended to be, "Who's That Singing Over here" is one of the greatest films the world has never heard of.

i am from india(kerala). i agree with your views.but to enjoy this movie fully one should know the political background also.plz try to give a link exclusively for grade++++. thanks for your great work

I know the political background, yet all serious messages were done in such a subtle way that many viewers will not even notice them. You have to admire this for creating such a simple comedy where you can even detect deeper levels if you try, without turning obtrusive.

As for a link exclusively for grade++++, just type in "masterpiece" in the search field and you will see a list of all movies/animes that were awarded with the highest grade. Or you can simply click on the links for numerous movies on the right side of this blog - most of them hold a special place in my heart, others were just placed there because I simply liked the way I formulated that particular review of a lesser movie.