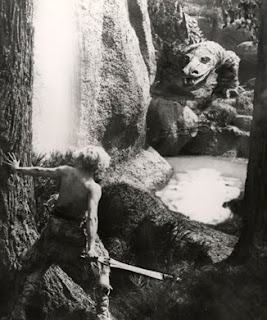 
Siegfried, the son of King Siegmund, is forging a sword at the isolated shop of Mime. When he hears the tale of Kriemhild, the princess of Bergundy in Worms, he goes on a quest to gain her love. On his journey he slays a dragon and bathes in its blood, becoming invincible, except for one part on his shoulder that was covered by a leaf. He also kills Alberich, the king of dwarfs, gaining his invisibility cap and the treasure. He arrives in Worms to marry Kriemhild, but her brother, King Gunther, accepts to approve of the marriage only if he helps him to marry Queen Brunhilde from Iceland first. With the help of his invisibility cape, Siegfried helps Gunther win in a duel. A double wedding is celebrated in the castle. Brunhilde finds out Siegfied cheated on the duel and orders him killed. Hagen kills Siegfried, Kremhild swears revenge.


"The Nibelungs: Siegfried", the first part of the move duology based on the medieval poem "Nibelungenlied", is an amazing exotic silent fantasy epic where Fritz Lang once again proves his tight directing skills, from the beautiful opening shot of a rainbow over a hill up to the finale where Kriemhild swears she will take revenge. It's a bitter and sober story about loyalty, honor, love and fate, a thoroughbred epic in full sense of the word, filled with great energy, although the second half is considerably weaker than the first. For an old black and white film, some sequences are incredibly exciting and esoteric: the virtuoso directed moment where Siegfried encounters a fire breeding dragon and slays him, the surreal sequence where Siegfried follows Alberich, the king of dwarfs, to his underground cave, the aesthetic match where Siegfried is invisible in order to help Gunther win, the phantasmagorical dream Kriemhild has. Despite being slightly overstretched, German-centralized and forcefully mythological at moments, "Nibelungen" is a classic event that has to be seen, a pompous ode to legends that instills quality in myths that otherwise aren't so cohesive, whereas Lang and his wife Thea von Harbou create a very own world for the very first time in the history of cinema with an underlying dose of realistic spectacle that became influential (especially noticeable in Milius' similar "Conan the Barbarian"), and Margarete Schon is amazing as the blond princess Kriemhild.