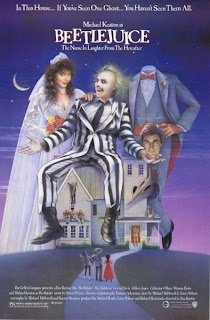 Barbara and Adam are a happily married couple in a little town in Connecticut. After they die in a car accident, they are returned to their home as ghosts, not able to get out, while their only clue is the handbook for recently deceased. After the snobbish family Deetz moves into their house, Adam and Barbara decide to scare them out with the help of a bizarre ghost called Beetljuice. Still, the ghost couple makes friends with Lydia, the Deetz daughter. After the Deetz decide to summon the ghosts, all hell breaks loose and Beetlejuice gets freed. Still, Barbara and Adam are able to ban him and make friends with the Deetz.

Cult horror comedy "Beetlejuice" is quite frankly one of the most bizarre and daring Hollywood films from the 80s, a wild mix between Fellini, Buñuel, Kafka and Tex Avery cartoon style where authors didn't care if they make the viewers mad so long as they have fun and do whatever they want to with their imagination. In this case, it is a surreal "haunted house" tale while Tim Burton's eccentric direction creates all kind of unbelievable scenes with the help of surreal claymation special effects: Adam as a ghost wants to leave the house, but the moment he does he is transported to a different dimension, a desert planet with two moons equipped with giant sand worms that are reminiscent of Lynch's "Dune". Adam and Barbara want to scare off the Deetz family out of their house, so they model and change their heads to look like a giant chicken and a grotesque jaw.

Michael Keaton as the deranged Beetlejuice is great, especially in the scary sequence where he transforms into a giant snake and appears from the stairway to attack the Deetz family, but Glenn Shadix simply steals the show as the hilarious Otho. That said, the movie is not particularly funny, many things seem senseless or stupid (the confusing ending) and not anyone can handle the bizarre tone and make it work, especially when Burton aggressively tries to impose it on the viewers: for all of it's incredibly imaginative scenes, the story seems more to be expanding the boundaries of quantity and larpurlartism than quality and substance. "Beetlejuice" is a sight to behold, but it's not for everyone's taste and it seems it would have been better if it followed the concept of the "Beetlejuice" cartoon where the title hero and the charming Lydia were friends, instead of enemies.