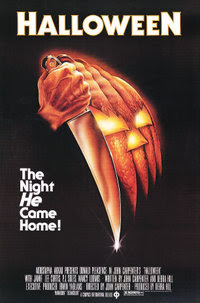 During one Halloween night in the '60s, a 6-year old Michael Myers killed his sister because she was dating a guy. In 1978, an adult Myers escapes from the Sanatorium and takes a car of a nurse to return home. His psychiatrist, Dr. Loomis, warns the sheriff about the danger. Meanwhile, teenager Laurie is preparing for her prom night, at the same time babysitting some kids. When Myers kills her friends, he goes on to attack her in the house. She stabs him with needles and a knife, but he constantly stands up again, until Dr. Loomis shoots him, causing him to fall from the balcony.

"Halloween" came during a very convenient period of John Carpenter's career, thus becoming a horror classic and a cult movie. It's not an extraordinary film, but praise has to be given to it's sustained violence that avoided banal shocks, wonderful mood and the legendary soundtrack, one that everyone heard of even if he doesn't know it. That's why "Halloween" is even today more impressive than some dumb slasher horror movies. After the magnificent opening title follows a brilliant 5 minute long take - filmed in Steadicam - that shows a subjective point of view of the murderer, Michael Myers, as a kid, walking around the house in search for his victim. Yet the rest is rather bellow that level, from unnecessary and trivial drama revolving around Jamie Lee Curtis' character and her friends up to the second murder, occurring an hour after the first one, that seems rather average. Michael Myers is shown as faceless, emotionless, brainless, as evil without any reason, but by that approach he was also left as an one-dimensional character that doesn't say a word during the whole film. Even when Laurie stabs him, he doesn't even moan, and instead just falls down and standing up again, which is unrealistic, as well as the open ending that gave an opportunity for a sequel. Although it may seem disconnected, "Halloween" is still a strong and surprisingly good horror, symbolically speaking about the chaotic effects of a dissolved family, much superior that many of its successors.