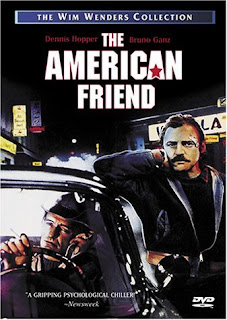 Jonathan Zimmerman, a picture framer in Hamburg, husband of Marianne and father of a little boy, is suffering from leukemia. During an auction, he meets Tom Ripley, an American art forger. After Jonathan gets letters that his doctor is hiding his real serious state, he accepts a check-out in Paris from Minot, where it turns out he doesn't have much longer to live. In order to leave some money for his family, Jonathan accept Minot's offer to kill a man for 250,000 DEM. But he pays him only half the amount and he is forced to kill another man in a train with the help of Tom. When Minot discovers this, he arranges numerous killers to wipe out Tom, but Jonathan helps Tom eliminate them. Tom sets the car of the killers on fire, while Jonathan and Marianne leave him and run away in the car, where Jonathan dies.

Excellent thriller-drama "The American Friend", a loose adaptation of Patricia Highsmith's crime novel "Ripley's Game", is one of the most unusual films from minimalistic director Wim Wenders, but also one of his best ones, a much more interesting achievement than many of his boring dramas. The bizarre "friendship" between the American Tom Ripley (brilliant Dennis Hopper) and the German Jonathan is maybe a rich allegory about the impact of American culture on Germany, but mostly it displays a corruptible side of people showing how there's no one the hero can trust - once he accepts the "Faustian" offer he will sink deeper and deeper into criminal milieu, where instead of killing only one person he ends up inevitably killing a bunch of them - while the roles of gangsters played by directors like Fuller and Ray only give the story a surreal meta film touch.

The film is full of great little details: in one scene, Jonathan finished the picture frame of an old lady in his shop. She gives him 60 DEM, but he says: "No, no, it's 20 DEM more expensive than that. It's 80 DEM.", but the old lady pretends she is half deaf, puts the picture in her purse and says: "Yes, yes, it will fit in my bag". Jonathan repeats his bill several times but the old lady "dodges" him every time pretending she doesn't understand him - until he finally says: "God, you're clever!" In another scene, he exits the elevator and enters his hotel room, but just as he is about to press the button to turn the TV on, he gets "shocked" by an electric charge. But the highlight is the long sequence where Jonathan follows a man through the Paris subway in order to assassinate him - unlike loud Hollywood crime films, this one executed the whole sequence completely quiet and tranquil, until the viewer gets nervous from such "peacefulness", knowing the horrible murder is about to happen.

I know it's not exactly Wenders at his best, but I think this movie is truly wonderful. Great review!

Glad I'm not one of only 5 people on the planet that saw this film. It's truly hard to find it anywhere...and for that matter other Wenders films as well. I enjoyed it a lot.