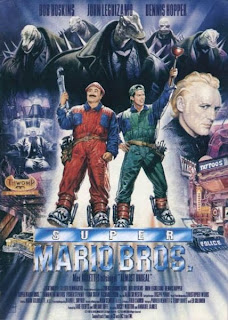 Brooklyn. Mario and Luigi are two plumbers who are going through tough times. When Luigi falls in love with Daisy, an archaeologist, she gets kidnapped by two shady people. Mario and Luigi follow them, passing through a wall into a next dimension, Dino-Hattan, where people whose ancestors were Dinosaurs are ruled by an evil dictator, Koopa. He wants to use Daisy's part of a meteorite to merge the two dimensions and conquer Earth. He also dethroned the former king and de-evolved him into fungus. Luckily, Mario and Luigi save Daisy and use special de-evolution guns that transform Koopa into slime. Then they go back to Brooklyn.

If there was ever a need for a popular Video game adaptation to get a better treatment than it got from Hollywood, then it was the 1993 "Super Mario Bros." film. Unfortunately, by today's standards, the only truly enchanting element from that film that remained is the magical song "Almost Unreal" from Roxette, but almost every other ingredient in it is problematic, from the fact that the story is cheating the fans because it doesn't even have 10 % in common with the original Super Mario concept (Luigi doesn't have a moustache, Koopa is a human instead of a giant reptile, the magic blocks and the super powers were eliminated...), through the too dark mood considered it is based on a child's game, illogical plot holes, bizarre ideas (curiously, towards the end, the World Trade Center is replaced with Koopa's two towers during the merging of the two dimensions), and a confusing showdown. Already from the opening where a baby hatches from an egg in a church does the movie show signs of madness of its screenwriters. However, if you watch the film with an open mind, it actually can be quite fun.

Here and there a few amusing jokes appear, mostly playing in the "normal" part in Brooklyn, whereas Bob Hoskins is pretty funny as Mario: in one scene he tries to flirt with Big Bertha, but she just slams him and he falls on the ground. When Luigi helps him get up, he just says: "She is just shy". And the scene where Mario and Luigi are in the elevator and music from "Dr. Zhivago" is playing in the background can really crack one up. Also, here and there the charming Dana Kaminski manages to show her talent in her small role as Mario's girlfriend, before she unfortunately abandoned her career as an actress. The Super Mario concept was always popular because at it's core lies an archetype of two average guys becoming heroes who save a princess in a foreign land where everyone respects them, and it would have served as solid purpose in any story. "Super Mario Bros." is a chaotic, bizarre mess with fast pace and a lot of jokes and action, and it can pass as an absolutely necessary film of the Video game, yet if there was ever a faithful adaptation of the franchise, it would have been forgotten in a flash. Those who think that a movie adaptation cannot be made out of this video game should again watch "7 Continents for 7 Koopas" and "Saving Princess Peach" for a lesson or two. However, the scene where Mario and Koopa are slowly, little by little, "disintegrating" into another dimension is almost poetic, which shows that even this wrong "Mario" approach had its hidden moments of inspiration.