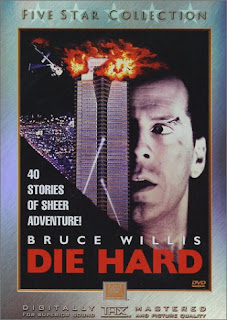 Los Angeles during Christmas. The New York cop John McClane came to town to visit his wife Holly, but the two of them enter an argument in her work place, the large office building called Nakatomi Plaza, and separate. Just then a gang of terrorists led by the German Hans Gruber invade the building and seal it off, taking everyone in it as hostages. They kill the boss, Mr. Takagi, and go on to disable the vault and steal millions of dollars in bearer bonds. John is able to hide and start a guerrilla like fight against the terrorist, contacting the police, but the only one who trusts him is sergeant Al Powell. Hans figures Holly is John's wife and uses her to blackmail John. Just as the terrorist are set to run away with the money, John is able to kill them and save his wife.

Films of the action genre were never highly respected and their macho protagonists would often finish their careers as soon as they would become older. Although many dispute such films like "The Terminator" and "Die Hard", they are actually surprisingly good and least to deserve such treatment among the action films. "Die Hard", the first and only excellent part of the series, is surprisingly simple and amusing in introducing the story about the hero that saves the day from the bad guys, differing a lot from the usual stupid action films that don't offer anything except mindless action. The highlights are humorous situations - John kills a terrorist and gets his gun, writes "Now I have a machine gun! Ho, ho" on his shirt and lowers him down to his evil boss Hans, who is surprised somebody would dare to meddle with his plans. In another scene Hans is warning his henchmen to be quiet, but then John's voice contacts him via the loud speaker, teasing him that he should write his top secret terrorist plan on the blackboard so that there won't be any confusion. But the most genius scene is the one in which the hero accidentally stumbles upon the main bad guy Hans in the corridor who quickly reacts and introduces himself as one of the hostages, figuring John knows only his voice, not how he looks like. It's an interesting movie full of energy and clever ideas, acting like a chess game between the two sides; the good and the bad, and even adding a little anti-establishment touch since all the police forces prove to be incompetent while the "little man" John does all the things right. Although the ending is a little bit overstretched and stiff, "Die Hard" is such a good film that it will even please those viewers that completely despise action genres, being universally appealing.