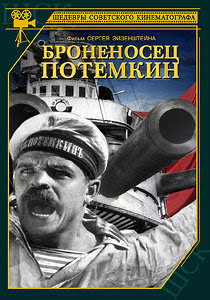 Russia after the war with the Japanese, 1905. Battleship Potemkin is sailing around the Black Sea, filled with sailors who are dissatisfied with the state on board: sergeants beat them up at night because they are not pleased with the guards and serve them rotten food. When a few sailors refuse to eat the soup, the sergeants decide to shoot them as a warning to others. Just in that moment sailor Vachiluk starts a rebellion and throws the sergeants into the sea, but gets killed. Potemkin sails to the port Odessa where the inhabitants give the sailors fresh food, but they all get attacked by Tsar's soldiers. The revolution spreads around the country.

"The Battleship Potemkin" is one of the most famous movies of cinema, an achievement of such a legendary reputation that it even raised exaggerated rumors that the director Sergei M. Eisenstein there invented intercutting montage for the first time - obviously, that was done by Griffith some 10 years earlier in "The Birth of a Nation". It's true that many critics benevolently look at old films and hail them for the minimum virtues, while they deprecatingly look at the modern films and degrade them for minimum flaws, but this silent history film, the forerunner of "The Mutiny on the Bounty", is still a masterpiece, an endemic example of passionate devotion to clear narration and wonderful style. One of the best sequences is the one where the sailors protest because of the bad soup so the Sergeant orders to all those sailors to whom the soup was "delicious" to make one step forward: a few of them does that while a title shows up on the screen stating: "Younger officers always want to indulge their superiors". After that, the Sergeant warns he will hang every rebel on the foremast. All the sailors look up at the foremast and get a hallucination that they already "see" a person hanging there. The Odessa stairs sequence with the Tsarist soldiers descending down the stairs and symbolically whipping away every rebel is a classic that was given a homage a hundred times, like in "The Untouchables", the claims that the whole film is a revolutionary propaganda today seem irrelevant when handled with so much intelligence, while many paroles ("It's the easiest to hit the weak!") seem like they were written by an innocent child, but with a lot of wisdom.