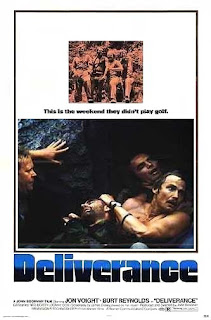 Four friends from a big city; Lewis, Drew, Ed and Bobby, plan a big adventure: during the weekend, they decide to descend from a big river in the wilderness with a help of two canoes. Lewis persuades two farmers to bring their cars down to Aintry. Then the four of them bring their equipment, among others a bow and an arrow, and start their journey. They spend the night peacefully but the next day Ed and Bobby reach the shore and have an encounter with two hunters in the forest. The hunters capture them and one of them rapes Bobby. Just then, Drew and Lewis arrive and kill one of the hunters with an arrow, while the other escapes. They berry the body and continue their journey, but Drew gets shot and killed by someone. Ed finds a hunter on the cliff and kills him. When they call the police, they don't say anything about the assault and say Drew died in an accident.

The underlying idea of the "Deliverance" is to force modern, rational men to confront the primitive and irrational - when somewhere in the exposition the protagonist Lewis says the "machines and the system are going to fail", it's obvious the four friends in the story are bored with civilisation and pleasant urban life and want to escape from everything in the wilderness, but they quickly discover the extreme realisation of their wish when they find themselves in a completely uncivilised and unpleasant trip fighting for their survival. John Boorman directed this anti-adventure film as a thoroughbred war film, without any compromise, confronting the barbaric side of people. Excellent role was delivered by Burt Reynolds as Lewis, who once said this was the best film he ever made (his later drama "Boogie Nights" sadly didn't stay in his best memory due to it's tricky subject): as a result, "Deliverance" was nominated for 3 Oscars (best picture, director, editing), 3 BAFTAs and 5 Golden Globes. The film is even today shocking, disturbing and intense, besides for it's raw style also because of the explicit sequence where a mad hunter disrobes Bobby in the forest, makes him squeal like a pig and then rapes him, before Lewis spots and kills him with an arrow. Lewis then continues to display the theme of the "vacuum" of civilisation by persuading his friends to not report anything to the police and simply dig up the body of the hunter saying: "I don't see the law here in the forest!", and the long, dry sequence where their canoes get smashed in the river and they don't know if they are or are not attacked by the second hunter as revenge is intense and suspenseful. Still, the story, stripped from any context, is a little hollow and vague: some deeper character portrait or emotions are not present, the motivation of the hunters is weak while some misadventures seem arbitrarily.