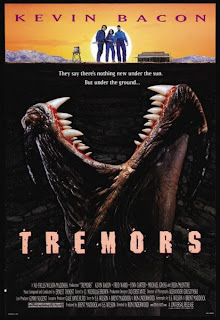 Val and Earl are two buddies who are tired of working occasional hard jobs in a small town in Nevada. They encounter a new inhabitant, student Rhonda who is conducting seismology tests around the desert. But just then strange murders start to occur in the town, and it is revealed they are conducted by strange, giant sand worms who live and dig under ground. As the 4 worms surround the town, all of inhabitants run on the roof of their buildings. Since they can all fit into a trailer of a bulldozer that is heading to the safe, hard granite mountains. But they get stuck on a big rock and manage to kills the sand worms with the help of dynamite. Val and Rhonda become a couple.

"Tremors" are basically a B-film monster flick made with just enough spirit, imagination and humor to please the audience. Unlike let say "Them!", where giant ants attacked people, "Tremors" offers a different kind of monsters, underground sand worms - reminiscent of the sand worms in "Dune" - that dig bellow the surface and are therefore practically invisible and omnipresent at the same time since humans are land locked creatures, creating a neat suspense out of the uncertainty when and where they will attack below someones feet. Among the interesting scenes is the one where a worker is drilling a hole beside the road until the moment when mysterious blood starts streaming from the ground, catapulting the tool away, and the one where the sand worms create a hole in the ground that swallows a whole car. It's a little bit surprising that Kevin Bacon agreed to star in this obscure, albeit campy cult movie, yet he seems to have a lot of fun in not playing serious for a change. There are a few clever ideas present, like the one where the heroes escape the danger from the sand worms by escaping on a giant rock, or the moment where a dead worm is found under the car and Walter says to Val and Earl: "I'll give you 5 $ for that!", yet as a whole "Tremors" are sadly not that fun, funny or entertaining as they could have been. A lot of things ended up turning stiff, and the lack of context or mastership degrades the film as a whole. But creating such a solid dose of thrill out of cheap sand worms puppets really is something to praise.