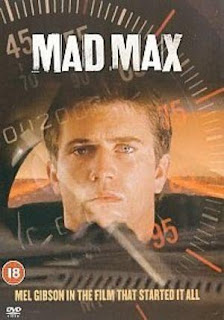 Australia in the future.The police is unsuccessfully prosecuting Night Rider, a psychopath who is endangering other people on the street with his relentless fast driving. But then police officer Max enters his car and starts the chase, causing Night Rider to die in a car accident. Max is loyal to the police, but is shocked when outlaws Toecutter and Johnny kill his colleague Goose by setting his car on fire. Max becomes disappointed with the police and quits, leaving with his wife Jesse and child to live in peaceful nature. But then Toecutter and his motorcycle band strike and kill his child and leave Jesse paralyzed. Max becomes mad with rage, enters his car and finds and kills Toecutter and his gang, while he leaves Johnny handcuffed to a car that explodes from ruptured gas.

Vicious and brutal action B film with a half-futuristic and quarter-post apocalyptic charge, Australian "Mad Max" surprisingly achieved a huge success worldwide and promoted Mel Gibson as the new star. Filled with car chases, frenzy suspense, nervous mood, unusual camera angles and drastic shots (the outlaws put the wrecked vehicle on fire with alive police officer "Goose" inside; Max uses his car to smash the motorcycle of a psychopath...), "Mad Max" is a good low budget film and a product of an enthusiastic author, even equipped with an interesting context where the hero Max lives in a devastated world up until it doesn't devastate his family. Clearly, one of the themes is that of a quiet, patient man who will tolerate atrocities of outlaws for a while, up until he reaches the point where he looses his patience and becomes mad with explosive fury. It's a simple, straightforward revenge story, but despite the virtues, the movie is not on the same level as the more successful campy achievements, like "RoboCop" or "Conan", due to it's shaky, ephemera and superficial tone.