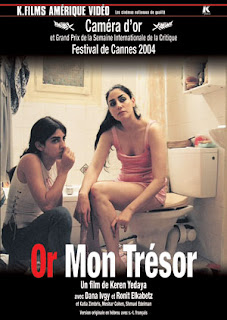 Tel Aviv. Or is an 18-year old girl worried for her mother Ruthie who is still working as a prostitute. Or buys her medicine against venereal disease, cares for her and finds her new jobs, like the one of a cleaning woman. But there is always a lack of money, so Or works as a dish washer, and sometimes as a prostitute herself. When she falls in love with friend Ida, his mother forbids him to see her again due to her "reputation". Despite many promising jobs, Ruthie returns to prostitute. Or becomes employed as an escort girl.

The theme of prostitution was always interesting movie stuff and drama "Or" from female director Keren Yedaya appropriately handled it using long, static shots that distanced themselves from the tricky story and presented it in an objective way, and in doing so it presented an interesting structure: the first half is very introverted, tame, almost monotone is it's characterization of protagonists, while the other half becomes it's complete opposite in which extroverted scenes of intercourse become more and more frequent, mostly revolving around the young heroine Or (on the street a customer takes her from behind; she has to do a fellatio to her boyfriend or sleep with the overweight, older landlord in order to clear her debt of house rent). Nominated for the Golden Palm in Cannes, quality drama "Or" is a feminine view on prostitution and it's system refusing to preach or cheaply blame anyone. The realisation as a whole could have been more skillful or poignant, but Israel's cinema remains an interesting cinema - the uncompromising bleak ending is authentic and actress Dana Ivgy delivered a great performance as the tragic title heroine that is somehow destines to follow her mother's footsteps: when at the end a touching moment shows up in which Or starts crying because her mother puts on make up and leaves the apartment to once again resume her work as a prostitute, the viewer simply has to be shattered.