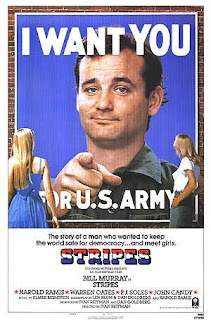 Taxi driver John looses his job, girlfriend and a Pizza in just one day, so he decides to enlist into the army, convincing his friend Russell to join him. Although Sgt. Hulka is very tough towards their unit, the two of them remain goofy and mischievous. When Hulka is injured by a mortar bomb, John completes the training of his group all by himself. In Europe, John and Russell steal a top secret assault vehicle to visit their MP girlfriends, but their platoon follows them and lands in Czechoslovakia. Still, John and Russell manage to free them.

After two successful comedies, Bill Murray and Harold Ramis were drafted by Ivan Reitman in the military forerunner to "Police Academy", "Stripes", that also became hugely popular. "Stripes" was made back in those days when the two comedians didn't have an opportunity to star in some real quality film: it's an avoidable, cheap, light fun without a real author's skill, but with a few truly poignant raw gags, not at all in a good relationship with the stiff finale. It's obvious the lazy screenplay and the execution were amateurish, but Murray's improvisational comical talent manages to make it appealing - in one funny scene in the base, he says: "Women dig me, because I rarely wear underwear...and when I do it's usually something unusual." Even though Ramis and the equally brilliant comedian John Candy are underused, they also contribute their fair share to the film: it's especially noticeable in the sequence where the volunteers are getting drafted in the army - they all have long hair, but for the army it has to be cut off. Yet, as if they have some special treatment, John (Murray) and Russell (Ramis) get their hair trimmed only a little bit, while Ox (Candy) exits completely bald, holding his cut hair in his hands and making an astonished facial expression. And Russell can't resist but not to start dancing: "Hare Krishna!" Without the three of them, "Stripes" wouldn't have been nearly as fun as it is. It's a flawed and simple comedy, nothing extraordinary, but a charming piece of 80s cinema were it was still normal to have at least 50 % of gags that were actually naturally funny.