I Love You, Alice B. Toklas 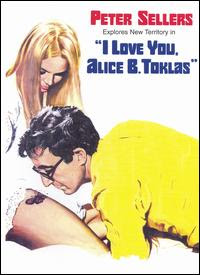 Harold Fine is a 35-year old lawyer in Los Angeles who leads a successful, but stiff and monotone life. His longtime girlfriend Joyce persuades him to marry her and they set a date, but first they have to attend a funeral of a deceased friend of Harold's mother. Since his car broke down, Harold has to take a flower power car and pick up his hippie brother Herbie and a hippie girl, Nancy. After the funeral, Harold gives Nancy a lift home and she sleeps over at his house. She makes cannabis cakes and stirs his life, until he breaks up with Joyce and starts a relationship with Nancy, lets his hair grow and becomes a hippie. But after sometime, he becomes tired of hippie life and returns to Joyce. But as they were about to marry, he leaves her again and runs away not knowing where.

After his marvelous '79 film "Being There", some critics started looking at Peter Sellers from a different perspective, finding new meanings in some of his lighter comedies, among them even in the charmingly naive "I Love You, Alice B. Toklas", a shaky essay about spiritual transformation disguised as a comedy. Sellers is truly good as the main hero, stiff lawyer Harold who changes his lifestyle completely and loosens up, the hippie undertones are a rousing wink at that counterculture with an unhidden sympathy, the cinematography is neat and some of the gags are pretty good, like the whole sequence where the undertakers are on strike so Harold has to take the coffin of the deceased in his cheerful flower-power car, but gets lost and arrives at the graveyard at night! Still, for all of those nice virtues, they can't hide the fact that the story is very thin and the humor extremely overstretched since it takes a very long time until a new joke pops out, and that the film becomes a "stranded whale" in the second half: the character of the hippie girl Nancy is at first amusing, but it soon turns out she is a one dimensional figure since she only knows one thing - to be "groovy" to everyone, as if she is programmed to do so, nothing else. It is never explained why she has that effect she has on Harold, and that isn't that important, but once he becomes a hippie himself he acts like a cliche and doesn't find any real expansion of spiritual consciousness. The bizarre end just confirms that shaky and unsure tone. In the end, "Alice" isn't much of a event, but it's one of those films that are so cute that we actually wish it were something more than they are, and not in the same level as many other mediocre films that are actually irritating.