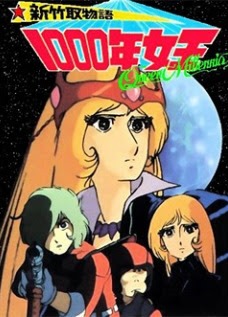 Tokyo, 1999. Hajime is a typical boy obsessed with space. His uncle, professor Amamori, has from his observatory recently discovered the 10th planet of the Solar system, called La Metalle. But the computer soon calculates that La Metalle has a very eccentric orbit and that it is heading right towards Earth. It won't collide with her, but because of its giant gravitation it is expected that Earth will be severely damaged and that large part of its population is going to be killed on 9th September at 9 o'clock 9 minutes and 9 seconds. After Hajime's parents are killed in a mysterious explosion, he is transferred to his uncle's observatory where he meets his female assistant, Yukino Yayoi. It is soon discovered she is Queen Millennia, daughter of Queen Lana of an alien race that lives under La Metalle's surface that kidnapped humans on number of occasions to use them as slaves. Yukino becomes good and decides to help humans, unifying her forces with her sister of the "Thieves of Millennia" in order to save Earth. After discovering a black hole is responsible for La Metalle's orbit, she destroys it with her ship. A shocked Lana decides to stop the invasion on Earth.

Anime "Queen Millennia" was briefly shown in Europe and after that disappeared in a "bunker", thus quickly affirming unbelievable cult reputation as a "lost treasure". When its 41 episodes are seen it's not hard to figure out why, because it really is a fascinating, nostalgic sci-fi story of old school, a Japanese take on the Nibiru pseudo-legend. Its only big flaw, besides a few illogical situations, is that the author Leiji Matsumoto decided to once again use his animation trademark - namely, all supporting characters are animated very well and realistic, including the main heroine Yukino Yayoi, except for the family Hajime - the main protagonists, the boy Hajime and his uncle Amamori are drawn again awfully bizarre and ludicrous with too small eyes and too big mouths, resembling somewhat like Homer Simpson. Still, after the viewer gets use to that little caprice, this esoteric, fierce and moody anime will shine in all its glory.

The complicated, but juicy story in which the mysterious 10th planet La Metalle is threatening Earth by crossing her orbit was conceptualized and executed with bravura and manifested magnificent scenes - people launch rockets to La Metalle's ice surface in order to change its orbit; Yukino uses her special powers to stop a giant Tsunami heading towards Tokyo; after passing near Saturn, La Metalle rips its rings apart; and after coming close to Earth, La Metalle is even seen causing a Sun eclipse in the sky. Finally, the scene where the chosen people are standing in a row waiting to be evacuated in rockets while the "average" people are protesting even today seems bitter and strong. This anime is a sight to behold, a spectacular space opera, a drama of cosmic proportions, and Matsumoto filled almost every episode with passionate, delicious details about space, but he also offered some deep truths about our world and humans. It is actually a hidden anti-Totalitarian, anti-imperialist message about Yukino's difficult realization that she is against her evil nation whose plans are selfish by wanting to kidnap humans in order to use them as slaves for their technology, and her transformation caused by love that serves as the only true value. A little more characterization, color and humor would have (theoretically) made this even the best anime ever made, but as it is, it's still excellent, a shining unknown jewel.

Hi! I followed your link from IMDB.

I saw this series as I was growing up and adored it. My favorite episode is when the leader of the "Millennial Thieves" is shown to be Yayoi's elder sister.

I think it's available on DVD directly from Toei but since I don't know Japanese I can't be sure. If you read Japanese would you please take a look?

Thank's for visiting and leaving a comment. I can't decide which episode is my favorite one, but the last 10 are definitely all fantastic.

Yes, it's avalible as a DVD in Japan, but, alas, the rest of us can only sadly sigh at the fact that it's still not (officially) available in the Western world.

I saw it too as young teen and loved it but as I found it recently its only the american version with Yayoy just leaving...
I couldn't find anything from what I remembered so you really saved my sanity...
Thank you
T