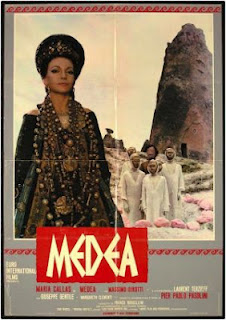 Chiron, a centaur - half man, half horse - raises the little Jason by teaching him about mythology. When Jason is grown up, Chiron is a normal man and talks in a more mature, realistic fashion. Due to his heritage, Jason has a right to take over the throne of Iolcos, but the king, Pelias, wants the Golden Fleece from the Colchis tribe in exchange. There, high priestess Medea abandons the Colchis culture, kills her brother and gives Jason and his Argonauts the Fleece, since she fell in love with him. Jason gives up on the throne and goes on to live with Medea in Corinth. However, when Jason wants to leave her for another woman, Glauce, Medea takes revenge and kills her and Jason's children.

The only film featuring legendary opera singer Maria Callas, Pier Paolo Pasolini's adaptation of Euripides' tragedy Medea is another typically hermetic film for him that caused a lot of misunderstanding and puzzled reactions from the viewers and the critics, however, upon deciphering some of the hidden meanings in the story it turns out into a surprisingly intelligent and highly literate artistic work that also says something about the modern times. The director himself gave a great analysis in the book The Centaur's Dream: Interview with Jean Duflot. "Medea" starts out as a fantasy, showing how Chiron, a centaur (!), talks to the little Jason, teaching him about mythology and the esoteric. However, once Jason is a grown up, Chiron shows up as a normal man, and talks differently, almost as a realist, whereby the director shows the transformation of Jason from a child with a childish mind to an adult who does not need fairy tales anymore. This opening already gives a small hint what is intended: Pasolini uses the relationship between Jason and Medea just as a basis for encompassing the texts of Lucien Lévy-Bruhl, Mircea Eliade and James Frazer as well as their views on anthropology, ethnology and the history of religion - one of the main questions is: was the mythological thought form just a forerunner to the logical thought form or are they two separate perceptions of the world?

In blending those two extremes together, i.e. using the Medea story just as a case study for those philosophical thoughts, Pasolini showed a rare "inner" directing, metafilm skill: the arrival of Jason (Greek, i.e. Western culture) who comes in contact with the Golden Fleece and Medea (Colchis, i.e. a "Third World Country") is a culture clash, with the Greek (profane) civilisation being represented with a straight line (evident even in geometry of its locations, for example in Corinth, where the fortress is shaped like a fine cube) since it is developing in linear fashion, in a certain direction, while the Colchis tribe (sacral) is represented with circles (evident even in oval costumes and locations, their caves (Cappadocia) which have circular doors, windows and "roofs") since their rituals are always the same and offer no signs of direction. After a talkative 10-minute prologue, Pasolini takes a different approach from Euripides' vast text and shows the next 40 minutes of Colchis tribe - where they dismember a man and bury his flesh in the ground to assure a good harvest - almost without any dialogue, as some sort of a folklore documentary, which also blends in with the storyline since they are the opposite of rational Westerners and do not use words that much, since they cannot articulate everything. The heroine, who abandons her culture and goes on to live with Jason in Corinth, is an example of Third World cultures abandoning their traditions and accepting the modern 'popular culture' during the Globalization: congruently, the Xenophobic sentiment around her contributes to her tragic actions, whereas the final line ("Now nothing is possible anymore!") indicates the end of mythology. Despite 'rough poetry' and some 'unpolished' scenes, "Medea" is an interesting film with more food for thought than pure entertainment.