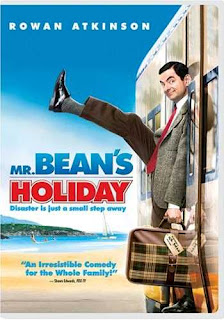 After winning a trip to Cannes and a video camera, Mr. Bean goes on a holiday to that destination. However, during his train ride, he accidentally separates Stepan, a little boy, from his dad, Emil Dachevsky, a jury member for the Cannes film festival. Due to the language barrier, Bean and Stepan have troubles coping in France. Still, they meet Sabine, an actress in a Carson Clay film, which is screened in Cannes. There they meet Emil again and reunite.

The second, and last film of the Mr. Bean movie series, assembled a decade after the first film, "Holiday" was not met with particular critical acclaim - critic Philip French even called the title hero a "sub-Hulot" - yet the basic formula behind the comedy - almost no dialogue, i.e. reducing the story to just relay on slapstick - still has some universal appeal because it reminds the audience of those good old black and white comedies from the era without sound, whereas Rowan Atkinson is again able to transmit his comic talent in this edition better than he was in "Johnny English". Congruently, the movie works best when it occasionally almost reaches Chaplinesque levels in the fabulous sequence where Mr. Bean is chasing after a chicken on a truck with a bike, accompanied by the great song "Crash" by Matt Willis, yet less so with numerous heavy handed moments or simply overstretched scenes. A small jewel here is Willem Dafoe in the role of a pompous-pretentious art film director: he almost steals the show when the first scene of his fictional film is screened at Cannes (by which the story actually adds a few satirical jabs at the festival): Dafoe's character Clay just palely stares into the camera, passing through a corridor on an escalator, while the titles say: "Carson Clay Presents...A Carson Clay Production...A Carson Clay Film...Carson Clay in...PlayBack Time", upon which the scene rewinds - it is arguably the best joke of the film.