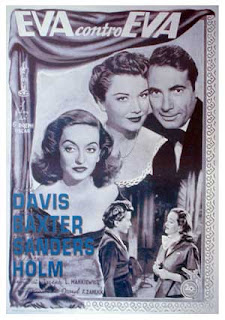 During the "Sarah Siddons Awards" for best theater performances, Eve receives the award for best actress, while the critic Adison DeWitt remembers how she got where she is now: a few months ago, Eve was unemployed and attending every Broadway play the 42-year old actress Margo starred in. Karen, Margo's friend, introduced them. Margo, flattered by her biggest fan, gave Eve a job as a secretary in her home, all the while arguing with her husband and director Bill and the screenwriter Lloyd. But Eve reacted stranger and stranger and mimicked Margo's every move. Eventually, Eve started working as Margo's understudy, and one day even starred in the play instead of Eve, becoming a famous star. Adison discovered her plan was to replace Margo all the time. After winning the award, Eve met a devoted fan herself, Phoebe.


"All About Eve" has a screenplay that is so well written that even if the director had done a horrible job at directing, all the actors had done a catastrophic performance and all the people responsible for music, editing and set design had done everything wrong, the movie would have still turned out to be good. This is one of those old films that truly deserve to be called a masterpiece, an amazing satire about show business (the story revolves around theater actors, but it's undoubtedly a symbolic jab at movie actors) that has a few surprising parallels with Wilder's "Sunset Boulevard", released the same year (an aging actress longing for a younger fan), but is still somehow a step above it, winning rightfully an Oscar for best picture. In fact, "All About Eve" was released back then when Oscars had a good taste for movies, thus turning out better than many future best picture winners put together.

Jospeh L. Mankiewicz created an amazing, surreal exposition: the opening shots reveal an invented "Sarah Siddons Award" ceremony where an older actor is holding a speech, but instead of his words, the narrator (Adison DeWitt) is speaking to the viewer: "This is a distinguished old actor. It is not important what he says, it is only important for you to know where you are and why". Then the narrator goes on to give a long description of all the major characters in the film, from Eve to Margo ("She made her stage debut at the age of four in "Midsummer Night's Dream," playing a fairy. She entered, quite unexpectedly, stark naked. She has been a star ever since."). Just as he finishes his long speech, he finally "switches off" and lets the old actor say his final words of the speech. From there on, the story is told from a flashback, displaying how Eve met her biggest idol, Margo. Anne Baxter is simply brilliant as the fragile, gentle, naive Eve who speaks childish lines ("If nothing else, there's applause... It's like waves of love pouring over the footlights") and the viewer can't help but feel motherly feelings for her, up until the little twist where she turns out completely different. Bette Davis is equally brilliant as Margo, a fascinating character/theater star ("Fans are mentally defect!"), and she rightfully won the best actress award at the Cannes festival. It's a great semi-bitter satire that delivers a strange message - there are no real fans, because everyone only thinks about their own interests, anyway - and virtuoso crafted, filled with hilarious dialogues.