The Bonfrie of the Vanities 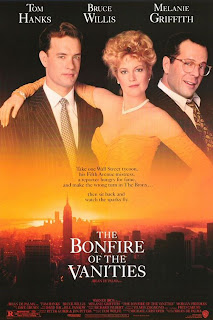 Journalist Peter Fallow is narrating how he became rich on a bizarre way: Sherman McCoy, a Wall Street investor, lived a respectable life with his wife in New York, up until the day when he picked up his mistress Maria in his car and got lost on a highway, ending up in Bronx. When she spoted a black kid approaching, Maria panicked and ran him over with the car. The couple decided not to report anything to the police. That caused a chain reaction: Peter spread the news that a rich, spoiled white man assaulted a poor black kid, making one reverend announce that "the perpetrator should be caught in the name of God". The police arrested Sherman, who ended up in court. But he managed to make a tape where Maria admitted she actually drove the car. Peter wrote a book about the case and won the Pulitzer prize.

"The Bonfire of the Vanities" didn't faithfully adapt the acclaimed satirical book with the same title from Tom Wolfe, causing it to flop at the box office and many critics to denounce it as a "complete failure". But many of those critics couldn't exactly define or explain their negative remarks. Pretty much, they only said that they hated the film, and that's it. It would truly be a complete lie to declare this film bad just because it wasn't faithful to the original because the passionate director Brain De Palma realized some parts excellently: his style can be especially sensed in the second scene of the film, the three minute long take that is following the narrator/ protagonist Peter Falow (a solid Bruce Willis) from his car up to the conference in the building. The complex, bitter and dark insight into interrelations between politics and society (many circles are prosecuting Sherman, who is white and rich, only to gain popularity and cheap sympathies among the black voters) doesn't satisfy on all levels, the story is too long and at parts too cynical, making compromises with Hollywood, while in the second part it looses it's witty satirical humor, becoming rather forced. Still, looking at it from today's standards, from some who never heard of the book or the negative reputation, the film is good and holds up well. In one of the best scenes, Sherman (played by the very good Tom Hanks) is trying to sneak into his apartment, secretly taking a transparent and "mixing" among the crowd of protesters who are protesting against him although they don't even know how he looks like. It's an interesting story about the everlasting human ignorance, greed, naivety and tendencies to believe everything, flawed but intriguing. But alas, critics just picked it as the Scapegoat of the year.