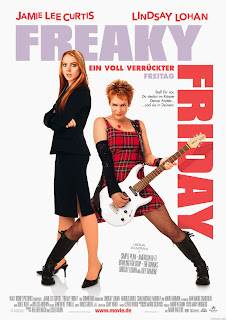 Anna is a normal teenager who has problems with her English grades in school, amateur rock band, problematic younger brother but mostly with her too serious mother, psychiatrist Tess, whom is preparing for an upcoming wedding with Ryan. When Anna and Tess one evening again enter into an argument they get a fortune cookie in a Chinese restaurant, waking up next morning and realizing they have switched their bodies! Tess, in Anna's body, has to write a test in school while Anna, in Tess' body, has to take care of her patients and the wedding. But in the evening they switch their bodies back and return to normal.

Although there are many films about the switching of bodies of two protagonists, the version from 2003 called "Freaky Friday" is one of better contributions. Of course, the movie lacks ambitiousness, master fullness, artistic values, ground-breaking style and so on, but it's simply irresistible, an amusing and accessible story about changing and questioning one's identity that's full of youth spirit and energy, even turning touching without becoming too preachy. The young Lindsay Lohan after this deservedly became a noticed actress, but still the best role was delivered by the hilarious Jamie Lee Curtis who was nominated for a Golden Globe as best actress in a motion picture musical or comedy. It's a simple film, consisting only of one note jokes and variations of the basic premise, with a clumsy execution, but a lot of situations are charming, like when Anna - in whose body is actually Tess' mind - decides to dress conservatively and change her "wild" hair due or when Tess (Anna) in one talk show, in which she should have talked about her book, starts acting like a teenager and cheerfully starts giving advice to the audience about "cute guys", which is a real jewel.