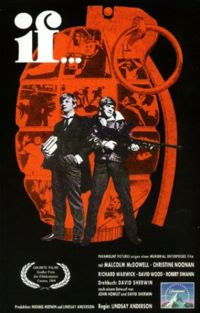 Mick Travis is a slightly rebellious student in an English public school, friends with his classmates Knightly and Wallace. But they are oppressed by the „Whips“, senior boys given authority as prefects of younger students. Denson is one of the most hated „Whips“. Travis' room is full with posters and rebellious ideas. One day he even goes to the city, steals a motorcycle and kisses a girl working in a restaurant. Travis is disrespectful over their authority, so the „Whips“ decide to teach him, Knightly and Wallace a lesson – they whip them in the gym. From that point on, the three friends decide to make a revolt: they buy real bullets, cause a smoke in the church, only to start randomly shooting from the roof at the mass coming out of the building.

Winner of the Golden Palm in Cannes, „If...“ is an unusual adolescence/ school film about repression that coincidentally gained a lot of hype since it was made in 1968, at the same time during the uprising in Paris. Static, heavy and demanding, „If...“ is at first rather confusing, hard to follow and surreal, but later on it gets all it's loose ends tied up just right and manifests slowly it's message about the revolt against the authority, in this case the younger students against the privileged older students, creating a strong drama with many symbols. The story is downright at the same time realistic (a student teases his overweight classmate by saying he is suffering from „Elephantiasis“, the students put Biles' head in the toilet, each boy lowers his pants so that a nurse can inspect their genitals...) and imaginative fantasy (the constant switch to black and white scenes, Travis and a girl wildly imitating tigers, a teacher entering the classroom with his bicycle...), constantly giving the director Lindsay Anderson space to experiment with the mood and mise-en-scene, showing no tolerance for dictatorship, but always objectively displaying the events. Wild, frenzy expressions from the actor Malcolm McDowell only enhance these motives. Slightly tedious, overstretched and too cold, and almost too surreal towards the end, „If...“ is a daring piece of escapism in film, making one only wonder what would have the film looked like if the ending was just the middle of the story.