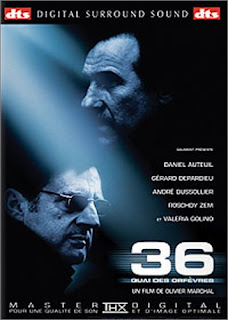 Paris. Leo Vrinks and Denis Klein are two average cops trying to catch a band that robbed an armoured truck. Leo is an honest cop, but doesn't hesitate to use drastic measures to solve a case. One day his informer Silien asks him to drive him in a car to some seemingly random place, but he actually ambushes his advisory Zarbib and kills him. Leo is shocked, but decides not to say anything. During a stakeout of the band's hideout, Denis also makes a blunder when he gets drunk and attacks them too early. In the following chaos, a lot of cops are killed. Still, Denis is cleared of charge and promoted as the new Chief of Police, while Leo is sentenced to jail. Silien is later found with Leo's wife and they are both killed by Denis. 7 years later Leo is released from prison and wows revenge. Eventually, he kills Denis with a help of his colleague.

"36 Quai des Orfèvres" is a good film with a better premise that deserved an excellent realisation, but as it is it's still enough for a recommendation. The story daringly displays a world where cops are worse than criminals, and where a police station can turn into a police state - both police officers Leo and Denis made a blunder on their jobs, but Leo was sentenced to jail while Denis was freed of charge and even promoted to the Chief of Police. Once when he got on top of the hierarchy, Denis even committed homicide and everyone who lied on his behalf was promoted, while everyone who dared to say the truth was degraded. Director Marchal objectively displays the injustice and the story's social commentary, giving subtle jabs of protest against the system (a policeman "congratulates" Denis by urinating on his pants during the celebration of his promotion), but he lacks that special spark to truly intrigue the audience. The film has a pale exposition, it's mood and style are grey, the realisation is standard and a lot of the supporting characters are dropped during the course of the story. Still, Depardieu is good even as the bad guy, and Daniel Auteuil is also splendid. "36 Quai des Orfèvres" didn't dare to become extraordinary, but it dared to send a warning to the rift between upholding the law and being faithful to the law.