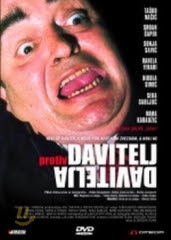 Pera is a middle aged man who still lives with his mother. But he is a little bit crazy and every time when someone insults his flowers that he sells, he becomes a cold blooded strangler who kills out of revenge. Since all his victims are women, inspector Ognjen thinks the killer must be a psychopath. Spiridon, a musician inspired by the murders, makes a song about the strangler, thus falling in love with Sofia. After the wedding, Spiridon becomes crazy and strangles Sofia, putting the blame on Pera whom he kills.

After his brilliant comedy classic "Who's That Singing over There?" the director Slobodan Šijan filmed mostly only inferior comedies, among them the overrated "How I was Systematically Destroyed by an Idiot" and "Strangler against Strangler", a forced, ville, trashy, bizarre mess that's only marginally funny as a satire about lonely middle aged men becoming mad, stumbling too often into misogyny. Since the US almost monopolized the cinema, films like the "Strangler" seem practically underground, and the concept about Belgrade as a world capital equal to New York in terms of crimes only enhances the anarchic touch. Some jokes are genius, like the decision of the musician Spiridon to make a song about the strangler, imagining his mentality, or the basic plot about the antihero Pera who kills everyone who insults his flowers, but the mix of banal erotic, horror and grotesque without a measure resulted in an achievement tha is more interesting in it's premise then in it's uninspired realisation.