The Woman in the Dunes 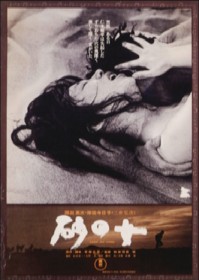 An entomologist is observing insects living in sand dunes near a Japanese beach. Since he missed his last bus, he takes the invitation of a local man and descends into a huge sand pit where a woman lives inside a house. The next morning, the latter is gone and the man figures he is stuck in the pit with the woman who is actually comfortable living that way, shovelling sand into baskets that are then exchanged from the villagers for food and water. The man manages to escape using a grappling hook, but is caught and brought back to the house. Months pass. When the villagers take the woman away to the doctor because she has complications during her pregnancy, the man climbs up out of the pit - but then returns to perfect a water sucking device.

Taoism teaches that "people should find harmony in the nature, i.e. that they should yield to it without resistance, accept the state of things, by which they will gain freedom of desire in this world". It is difficult to overlook the parallels with Hiroshi Teshigahara's art-film "The Woman in the Dunes", that repulsed a large part of the western audience with its unusual ending that was perceived as conformism. Winner of the Grand prix in Cannes, nominated for 2 Oscars (best foreign language film, director), "Dunes" is an overrated and overhyped, but still strong expressionistic piece of metaphor cinema since the only way you can interpret it is to look at it as a giant allegory - there's simply nothing else in the movie except symbolism (the story is deliberately unrealistic and can hardly be regarded as a commentary on the "Stockholm syndrome"; only the main hero is a fully developed character, a strong rebel, while the woman is practically without personality, a passive puppet, again establishing an interesting yin and yang counterbalance).

Similarly like Bunuel's "Angel of Extermination", here the hero finds himself trapped in a sand pit together with a woman almost by some supernatural force, forced to shovel sand indefinitely, mirroring Sisyphus. Bitter and disturbing, the movie flows as some sort of avantgarde-shock cinema, equipped with a few aesthetic images of dunes that almost "mimic" the shape of human body (emphasized in the two erotic scenes) or awe (the 'landslide' of a wall of sand), even though "Dunes" would work far better if it was 50 minutes shorter, instead of forcing the overstretched story that seems diluted after a while. The movie was subsequently analyzed from various perspectives, including religious ones (i.e. that the villagers are gods who forced the man to live with the woman in the pit), yet the universal unease of it radiates from the common human fear of fatalistic destiny from which there is no escape - whether someone is sick, ugly, has to do a job she/he doesn't like or live a life he/she didn't choose, the viewers can identify with the story about how life puts people in a situation they never really wanted.

I only just saw the movie. I think very Taoist. We all live in our sand pit, no matter how we shovel, the edge that surrounds us never disappears; it only changes shape. At the end, he realized one shape is just as good as another, and if all we have to do is work a few or many hours a day .... well, he can still work out his capillary-well design and maybe still get his name in a book. Perhaps my genealogical data base will do the same for me, which I endlessly work on here in my pit of sand.

By the way, Sisyphus he was not. Sysyphus was punished for being a terrible, liar, cheat, and wanton killer. Our sand man, a decent man, chose to go down the ladder in hopes of promised good hospitality, which he received.