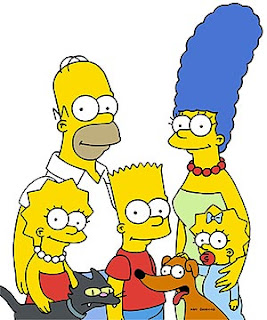 The Simpsons are a "typical" American family living in a house in Springfield. The head of the family, Homer, is a beer drinking, clumsy worker in a nuclear power plant. His wife Marge is an uptight housewife. They have three children: Bart, a naught boy, Lisa, an intelligent and sensitive girl, and Maggie, a little baby. Together they go through numerous comical misadventures.

A long time ago, "The Simpsons" were truly an excellent comedy show, but looking at it today it would have been better if they followed the way of "Seinfeld" that ended while it was still great. It's hard to admit it, especially if you're a fan, but the most successful animated series of the 20th century got with time consumed by its own success since it overstretched itself with far too many episodes. Yet, maybe it's better to take it from the start: namely, the first 8 seasons of the "Simpsons" were truly a delight and rightfully turned the show into the voice of the 90s: the Simpsons are a family that's your family, just with a distinctive yellow color. Created by Matt Groening and developed by James L. Brooks, the series pushed the limits of style and substance, offering Americans a rarely seen insight into a cartoon for adults while the writers cleverly displayed small details from everyday life routine and managed to make something special out of them. The range of gags was often hilarious: for instance, in episode "Marge vs. the Monorail", there's a scene where Marge complains that the mayor should repair numerous holes on the Springfield road, and instantly there's a clip of the event, where there's a hole so big that a whole popcorn truck falls into it, causing an inside explosion and burst of pop corns, and the guest appearance by Leonard Nimoy was pure genius. In the famous "Rosebud" episode, Mr. Burns was searching for his lost teddy bear Bobo, offering a big award, and broadcasted its photo on TV - but the screen picture was covered by the identical Bobo itself raised by Maggie, and Homer did not notice it! The whole story became even funnier when Homer refused to give it back which caused Burns to block every TV program and broadcast his own shows: in one "humorous" show, Burns enters a house and says: "I'm back" and the audience laughs. Smithers says: "So soon?" and the audience laughs. Burns replies with: "Yes" and the audience laughs again. But Homer even enjoys it, which is a fantastic jab at unfunny sitcoms.

But the best episodes were always written by Greg Daniels, from "Bart Sells his Soul" up to "Lisa's Wedding" (set in the future, where there was a nice little running gag revolving around the fact that a 16-year old Maggie never gets a chance to say anything), even the best episode of all time, "Homer Badman", which was a virtuoso made satire at sexual harassment: Homer's "Rock Bottom" interview that was heavily edited - noticeable in the shifting of the clock hands - so that his words were rearranged to seem as if he is a pervert, the perfect "Under the Sea" musical sequence, the "Gentle Ben" sequence with the bear host, the TV movie where Dennis Franz plays a vicious Homer about to grab a girl who says: "I'll scream so loud that the whole nation will wake up"....everything was set up just right and ridiculed the media madness with smashing ease. Among the great early episodes was also "Lisa's Substitute", an emotional masterwork involving a sweet substitute teacher, Mr. Bergstrom, who learned kids with the help humor and creative charm and even gave Lisa a farewell note stating: "You are Lisa Simpson": he was voiced by the brilliant Dustin Hoffman, who even omitted his own name and credited himself as "Sam Etic" - giving a wise lesson in humbleness to all those other star celebrities who made guest appearances by pompously stating their names in order to slime in with the audience. Coincidentally, Lisa Simpson, voiced by Yeardley Smith, always sparkled in an unconventional role of an intelligent, rebellious, multi talented daughter who acted as the sensitive motor of the family.

But that was only in the first 8 seasons. Already somewhere in season 6, shaky episodes started to appear, puzzling fans by surprisingly uneventful screenplays. There were still some great juicy and satirical gags present (in "Bart vs. Australia" Bart accidentally phones Hitler in South America!), even though season 7 and 8 went on to get even more shakier. And by the time the show reached season 9, the whole thing went downhill. Sadly, the humor simply wasn't that engaging anymore because it became just a bunch of gags recycled from previous seasons, but the producers forced the writers to continue making new episodes no matter what because of the high ratings. In the end, that led to some painfully bad episodes: the trillion dollar note? Crap. Lisa starts dating Nelson? Crap. Marge accidentally chops up Homer's thumb? Crap. The whole show became trapped in a limbo where only die-hard fans could go on to enjoy the once funny characters now performing unfunny jokes: quite frankly, after a while, one could pretty much get into the pattern of the show and recognize every gag by sorting it in some 20 categories. When in one late episode Marge gives Lisa the note stating: "You are Lisa Simpson" and she replies with: "Mom, we already had that", you can almost hear the writers sadly saying: "We know we are out of ideas, but will you pretty please continue to watch us?" By having the characters always say the same lines that were chewed out ages ago, wearing always the same clothes and always acting the same, they became cliches and the very routine sitcoms they ridiculed. One just has to take the late episode "Large Marge" where Marge accidentally got giant breasts after a surgery - even though the authors swore it was going to be the funniest episode of all time, there wasn't even one laugh-out-loud moment. When one just thinks what the earlier "Simpsons" could have made out of that plot, one really becomes depressed. If the show ended with season 16, there could have still been a chance to call it excellent, but sadly it stopped being funny back in 1997 and by crossing the 400th episode (!) it ultimately turned into a "Melrose Place" like soap opera.

Ah, The Simpsons (well, classic Simpsons at least.) I'm currently buying and rewatching up till season 8. I can't bring myself to go any further than that.

Exactly my sentiment. The first eight seasons were a masterpiece of satire and even a brilliant observation of 'slice-of-life' - and even sometimes touching without turning sentimental (Lisa episodes). But after that...Man, what they did to the Simpsons is downright a blasphemy. I do not even watch these new episodes, they are simply cringe-worthy compared to what they started with. A few good gags show up here and there, but overall it became all to cheap, blatant and predictable.