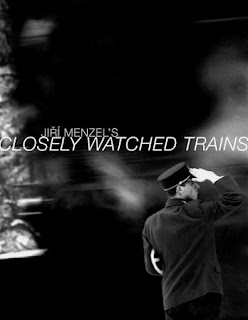 World War II. Czech republic is occupied by the German army. Miloš is a young lad who works in a railway company and controls the trains in a Railroad Terminal, following the footsteps of his father who went to retirement when he was just 45 years old. Soldiers passing by kiss with girls in wagons while the leader of the partisans is convincing everyone in his office that the Germans will be defeated soon. Miloš goes to the apartment of Masa, a girl whose uncle is a photographer, but fails in bed due to his nervousness, so he tries to commit suicide by cutting his veins. Then he falls in love with a young partisan woman and throws a bomb into a wagon full of Germans, but dies.

"Closely Watched Trains" is a praised comedy and one of the most famous films from Czech director Jiri Menzel, a story that describes the phase of growing up during the time of World War II without any vulgarity or stupidity, just with understanding and emotions that were neatly incorporated into the humorous whole. The exposition is brilliantly hilarious: the young hero describes how his family is so lazy that his father went to retirement when he was just 45 years old, while the most beloved hobby of his grandfather is to watch other people work (there is even a little vignette added as a cherry on top, showing how he is a failed hypnotist who unsuccessfully tried to hypnotize Nazis in tanks and thus stop the invasion of his country), and while he is saluting his colleagues "correct" his arm posture. It's a truly very good film, a small classic that neatly leads the narration and it's characters, while almost every actor is great. Sadly, one could complain that the exposition is the best part of the film: after great first 20 minutes, the movie looses it's initial quirky tone and fails slightly into anemic territory, probably due to unfinished screenplay where a lot of dramaturgy seems improvised and arbitrarily, while at moments the supporting characters lead the story more than the main protagonist. Still, it's a quality made film of a time period that has more than a little sympathy for it's hero whose love life gets with time more turbulent than the war, and the surreal touch of ordinary is another virtue.