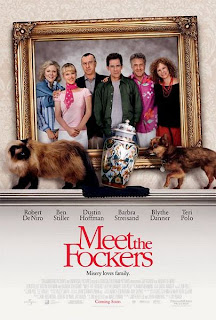 Greg Focker takes a vacation from his work as a male medicine nurse and visits his fiancee Pam and her parents, Dina and the conservative, retired CIA man Jack. Together with little Jack, the baby from Jack's other daughter Debbie, they take a VR ride to Miami to finally meet Greg's parents. But once there, Jack is stunned to find out that Bernie, a lawyer, and Roz, a sex therapist, are a very liberal Jewish couple. To further complicate the matters, Pam finds out she is pregnant and begs Greg to keep it a secret, while Jack suspects Greg has an illegitimate 15-year old son Jorge. Jack looses his temper and leaves with his VR alone, but changes his mind and accepts Greg's parents. In the end, Greg and Pam get married.

The sequel to the hit comedy "Meet the Parents", "Meet the Fockers" is a very amusing film in the terms of "guilty pleasure". After a great start, the film sadly quickly turns into a mediocre, half-heartedly realized cheap comedy with crude humor, vulgarity and juvenile ideas: the sequence alone where little Jack, a baby, is raising his arms and making motions as if he wants to pinch when he spots Isabela's big breasts while everyone around is laughing, is one of the most idiotic gags of 2004. Not to mention the embarrassing one where big Jack wears a fake tit to breast feed little Jack. Mediocre director Jay Roach and delinquent screenplay are too obvious flaws, but on the other hand, if one can pass by them one can discover a nice family message about understanding and accepting differences, and the sole tangle revolving around the "secret" clash between the conservative, right wing Jack (Robert De Niro) and Greg's liberal, left wing parents Bernie and Roz truly has some highlights and is a nice delight: they are brilliantly played by the genius Dustin Hoffman and Barbara Streisand, who are one of the reasons why this films deserves to be seen. Even though Hoffman is underused, he still has that comic charm required for comedies, obvious in the scene where praises Greg, standing next to him, and says: "I conceived him with only one testicle! Imagine how he could have turned out if I used two"! Even though the authors wanted to stay neutral in the "incompatible" differences and conflicts between the two families, it is noticeable in some moments that they had sympathies towards the Fockers and nicely used them as a backup for the poor Greg. If the humor was more sophisticated and had more original ideas (like the one with Jorge as Greg's possible 15-year old lost son, played by Ray Santiago who really looks so much like Ben Stiller that it's spooky), this could have been a really great family comedy.