Saber Rider and the Star Sheriffs 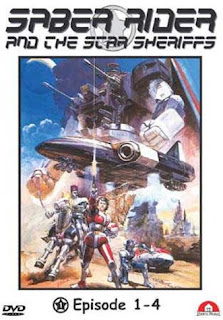 In the future, people started colonizing distant planets all over the Universe, but they are threatened by evil creatures from another dimension, Outriders. But justice and peace get restored by the specially trained crew called Star Sheriffs, led by Saber Rider and his colleagues Colt, Fireball and a girl, April. Together with their spaceship that can transform into a giant robot Ramrot they challenge the evil robots from the Outriders. After many adventures, they defeat the enemy.

On the German website Wunschliste.de, under the category animation, anime cult series "Saber Rider and the Star Sheriffs" was a long time situated on the 1st place on the top 20 list of the most desired animated shows to get urgently broadcasted again on Television. That's a little bit surprising since "Saber Rider" today seizes attention more with nostalgia than with some quality, but even that's not a small deal: rarely can one today find such pure shows that are not ashamed of exaggerated touches that courageously mix Western and Sci-Fi elements, like when the title hero is riding on a robot-horse in space, and besides that even various Spaghetti Westerns are an example of thoroughbred trash made with a lot of spirit. The pilot episode is very amusing (Fireball almost looses in a race when his vehicle gets slammed by Colt's ship who mistakened him for a wanted criminal), the tone of the good vs. evil story of the mecha genre is a lot of fun while the actions from one of the bad guys, Jesse, who was a normal cadet in the sheriff academy until he was rejected by his love April, are quirky (he wanted to save April from some outlaw in order to end up as an hotshot in her eyes, but was beaten to the punch by the faster Saber Rider; In the academy, April throws him to the floor in "self defence") and cleverly displays the theme about how sometimes love problems are the main causes of evil. The American dub of the show made a lot of changes, from the character's names up to the fact that they placed the blond Saber Rider as the main hero when in the original that was Fireball (!), but that just added to the wackiness, and the German dub was even weirder: the famous Arne Elsholtz borrowed his voice to Jesse, thus the dubbers couldn't resist to place a faked inside joke when Saber in one episode spots a bull and says it reminds him of "General Arne Elsholtz". On one hand, the naivete and repetitiveness of the episodes bother, but on the other hand Saber and his Sheriffs are irresistibly sympathetic and don't even hesitate to pretend to be outlaws in order to get hired by the bad guys so that they can spy on them (!), and the ending is super.