The House of Flying Daggers 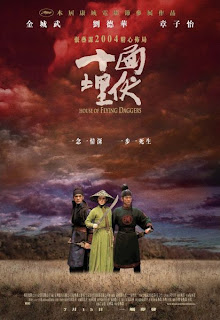 Shi mian mai fu; Action fantasy, China, 2004; D: Zhang Yimou, S: Takeshi Kaneshiro, Zhang Ziyi, Andy Lau, Song Dandan, Jun Guo, Hongfei Zhao
China, 9th Century. The corrupt government is threatened by a rebel organisation called "The House of Flying Daggers". Jin, captain of the government army, is persuaded by his friend Leo to gain the sympathies of a blind dancer Mei who has ties with the rebels and infiltrate them. Jin pretends he wants to join them and helps Mei escape from the army. The two of them travel through various forests and fall in love. Upon reaching the rebel headquarters, Jin gets arrested since it turns out Mei isn't blind at all, but just made a plan with double spy Leo to capture him. Mei is ordered to kill Jin, but she sets him free and admits she really loves him. Leo stabs Mei with a knife and starts a fight with Jin. She dies by saving Jin.

Zhang Yimou's opulent martial arts romance "The House of Flying Daggers" is a very good, critically acclaimed film - it was nominated for a Golden Globe as best foreign language film and for 9 BAFTA awards, including best actress, the brilliant Zhang Ziyi - and is definitely a better flick than his previous "Hero" that was simply too exaggerated to be taken seriously, but it's still pretty flawed. Namely, by following China's famous "anything goes" film tradition, "House" also turned out a little bit over-the-top by containing numerous exaggerated scenes: already in the exposition, where the seemingly blind heroine Mei is daringly copying every hit a nut makes on dozens of gongs with her dress weil, does the movie establish an artificial and surreal tone whose only purpose is to indulge the exotic needs of the audience. Still, the story is really good because every third represents the negation of the previous one with unexpected twists, one of which reveals that Mei actually isn't blind at all. Some of the three plot twists during the course of the film seem arbitrarily, but they give a nice little spark and present a neat, tragic love triangle. Action sequences were also over-the-top non stop, from daggers that can fly and hit a target better than a missile guided rocket up to a great army attack from the trees, not to mention the good old "hero gets saved in the nick of time" cliches, but the best elements are the ones revolving around emotions and romance, especially in the scene where Mei is bathing naked in the nature and since she is "blind", she isn't sure if Jin has left her sight or if he is spying on her. "House" is a shaky film, but it has enough poetry to work.