The Secret of the Sword 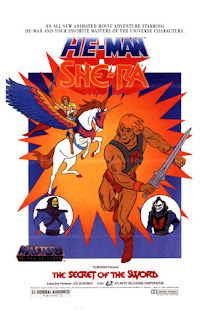 The Sorceress awakes from sleep by a mysterious magical sword. She summons Adam and his talking tiger Cringer and gives them the assignment to find its owner. In order to do so, Adam and Cringer go do a different Universe, to planet Etheria, and settle in a pub. Just then the Horde troopers storm in and cause a commotion, so Adam stops them and runs away with Bow in the forest, automatically joining the rebels who fight against the tyrant Hordak. When the rebels try to free a village, Adam transforms into He-Man and gets caught by the Horde, yet meets Adora and tells her that her boss Hordak is evil. When with the help of the sword Adora finds out she is He-Man's lost sister, she transforms into She-Ra and frees him. Hordak futilely asks help from his former disciple Skeletor. The rebels free a part of the country.

One of the last films from the company "Filmation", "The Secret of the Sword" is a testament about how a little effort can make a difference, and that difference can really be sensed since the story as some sort of a homage blends He-Man and She-Ra into one world, turning into the best He-Man movie. "Sword" suffers from a few banalities and stiff stock footage of movements, yet as a whole it's a meticulously animated, surprisingly realistic, nostalgic enterprise from real He-Man fans who wanted for once to really give the audience a run for their money and create something special, and the story really has some pure moments: for instance, He-Man's lively first encounter with the Horde or the almost virtuoso sequence where he is captured in a booth that slowly drains his energy while Adora, the Horde captain, can't sleep and wakes up in the middle of the night: she then goes to the chamber where he is being held and wants to help him, but also wants to stay loyal to the Horde. Her struggle with herself is a real drama with great emotions.

And then, finally, she takes the sword, transforms herself into She-Ra and frees He-Man. Simply amazing piece of writing that combined her transformation with her change of character. The core of the story is actually family since Adam's twin sister Adora was kidnapped and adopted by the evil Hordak who wasn't just her father but her ruler, yet in the end her good family ties can't be ignored. Many are regarding this threnody on those two cult shows with nostalgia, and even though the film is eclectic, as a whole it has some magical mood, manifested already in the fantastic opening song "For the Honor of Love", the colors in the whispering woods are opulent and the directors at moments display an excellent timing in the combination of characters and their characteristics (for instance, Hordak transforming his arm into a cannon or his out of place meeting with Skeletor that combines both of the two worlds). All in all, the movie is simply excellent due to its sharp tone, and that's something He-Man and She-Ra fans probably could have never imagined.