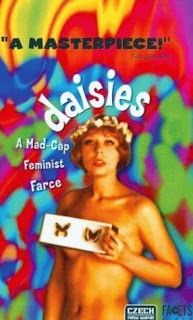 A giant spinning wheel is intercut with scenes of a bombardment of some town. Friends Marie and Marie are sitting in their bathing suits and talking about life, while every movement of their hands in causing strange creaky sounds. One Marie has long black hair while the second one has short red hair, both have a mad fun and don't care for the social norms. The call one gentleman for a date only to get rid of him in the train, and repeat that procedure four times. Marie steals the money of a woman. The two Maries start and argument but quickly reconcile again and continue searching for happiness. Nobody notices them on the street so they enter an elevator and find a room full of food. They destroy everything there and climb up a lustre. Suddenly they find themselves in the water and drown. If they had another chance, they would have done the same.

A magical world of pure Dada: shining satirical plotless comedy "Sedmikrasky" describes the friendship of two main heroines, both called Maria, with many symbols, while the genius visual style of the director Vera Chytilova can be sensed already in the sole sequence of the music of the piano, where in fast rhythm images of stuffed butterflies are exchanged for every musical note! In the world of cinema, 95 % of all films have a clear story that everyone can follow, but "Sedmikrasky" is one of those 5 % of experimental films that don't have either a head or a tale and will obviously cause a part of the viewers to dismiss it as garbage, but it's a radical, inventive and rich flick with a short running time of only 75 minutes that was build exactly on that episodic notion in order to try something different in the movie world. The two Marias in the end demolish a room filled with wealthy food just for fun, which shows how the youngsters can't identify with the Communist rule and become auto destructive, which in the end caused Chytilova to get banned from making films in Czechoslovakia for years. Among other original scenes in this feminist film are red, green and blue photography, a high speed shot of bubbles popping out in a glass, heroines "cutting" themselves with scissors so that their limbs are flying in the room and chewing of the food on the paper. Truly a unusual classic from which one can learn a lot, but it's so hermetic and chaotic that many will dismiss it.