The Jetsons Meet the Flintstones 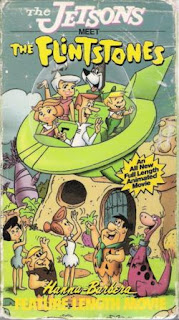 Because Fred Flintstone and his friend Barney were playing poker when they should have been at the night shift at work, their boss Slate fires them. They take their wives out for a "cheap" vacation in the wilderness. Just then, the Jetsones showed up in a time machine from the future and made friends with them. But because of a mistake, the time machine causes the Flintstones to travel to the future, while the Jetstones stay trapped in the prehistoric town of Bedrock. Both families have difficulties in time periods they don't belong. Still, robot Rosie manages to repair the time machine and bring the families back to their own time, while Mr. Spacely makes a fortune producing old cars in the future.

Childishly-naive crossover animated film "The Jetsones Meet the Flintstones" seems rather slightly dated by today's standards, but at the same time it displays a nostalgic document of the time when cartoons relayed on the good old lovable, pure atmosphere as opposed to many today's aggressive "children's" shows. The basic idea of the most famous Hanna-Barbera family from the past, the Flintstones, meeting the most famous family from the future, the Jetstones, is simple but interesting, and the following step when they end up stranded in each others time period gives two "fish out of water" stories in one. It's a simple little film with a "sustained" kind of humor, where a lot of gags have been borrowed from the two shows, and the opening shots even show a little dose of sharpness in the parallel montage of a typical working morning in George Jetson's and Fred Flintstone's life, as well as a cute observation that no matter how man kind progresses technologically, some problems will always stay the same, or nice details (Wilma making Fred his favorite breakfast in order to "subtly" persuade him to take her on vacation), which is a welcomed counterbalance to the film's flaws, mostly revolving around thin screen time of some of the characters (i. e. Judy Jetson's romance with the rock star Iggy is dropped before it even started). Even if the film contains only half of the charm from "The Jetsons" and half of the charm from "The Flintstones", when put together that's just enough of charm in this double addition.