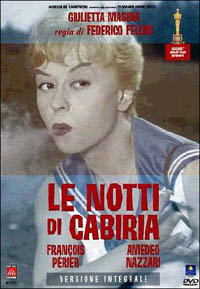 Prostitute Cabiria gets robbed by her lover Giorgio who pushes her into the river and gets away. Three boys manage to save Cabiria from drowning, but she just gets insulted and returns home. The next night she goes to "work" with her friend Wanda on the street. She gets picked up in a car by the famous actor Alberto who brings her to his mansion, but hides her in the bathroom when his ex-girlfriend Jesse returns to him. Later on, Cabiria goes to a church where wonders happened and then to a magic act show where she gets hypnotised. There she also meets Oscar who claims to have fallen in love with her. Cabiria gets all her money to get married to him, but he also robs her and runs away.

Out of 22 feature films directed by Federico Fellini, "Nights of Cabiria" (written among others by Pier Paolo Pasolini) is one of his most unknown ones, although it deservedly won an Oscar for best foreign language film and was nominated for a Golden Palm in Cannes. The reason for that lies in the fact that Fellini decided to show the sensational topic of prostitution in a rather unsensational, static and shy manner, leaving the tricky elements to the imagination of the viewer, which is a rather narrowed portray. Although not as good as his masterpiece "The Road", "Cabiria" is still a quiet masterpiece non the less and wonderfully simple and funny. From the opening shots where Cabiria is standing on the edge of the shore of a river and nonchalantly waving her purse up and down, up to the situations where she bumps into "invisible" glass door or picks up stinking flowers, the story is overweeningly and humorously leading the mood while Cabiria's smile in the last scene, refusing to be sad despite the tragic ending, is so fascinating and enchanting that it overshadows millions of other loud scenes filled with special effects and spectacular action. Out of all prostitutes that ever appeared on the big screen, Cabiria is one of the most unusual ones because she is completely unsexy since she always acts like a little kid, always doing something wrong, grimacing but hiding a vulnerable side: excellent Gullieta Masina, who won the best actress award at Cannes, is great in the leading role. Out of all the characters he created, Fellini once said that he always worried the most about Cabiria.