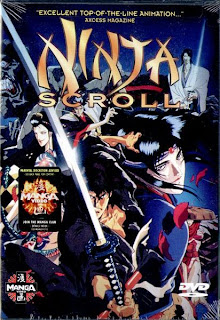 Medieval Japan. A team of Ninjas is sent to investigate a plague in Shimoda village, but they get killed by a monstrous stone-man Tessai, one of the "8 Devils of Kimon", except for the girl Kagero. Just as he is about to rape her in a cabin, he is stopped by the invincble swordsman Jubei. Dakuan, an old monk, poisons Jubei and promises to give him the antidote if he helps him stop the "8 Devils"and their evil boss Gemma from transporting tons of gold onto a ship that would help finance a dark organization that would topple the government. Jubei agrees and is joined by Kagero. Kagero gets killed, but Jubei sinks the ship and kills Gemma, swimming back to shore.

Dark medieval anime "Ninja Scroll" is, just like most adult animes, not intended for children due to it's uncompromisingly mature story filled with splatter violence and sporadic erotic tone, something that most American animators back in those days wouldn't have even been able to imagine. The director and screenwriter Yoshiaki Kawajiri directly displays that violence and Ninjas are never romantic but always depressing, bleak and horrifying, not hesitating to line one dark sequence after another (the stone-man Tessai tears up the hands from a good Ninja and drinks his blood, then proceeding to capture the female Ninja Kagero and licking her breasts and legs in a cabin, but just as he is about to rape her she is saved by the invincible Jubei), but basically it's a positive, good old basic story about good vs. evil, equipped with a invincible hero Jubei that is cynical on the outside but good kinded on the inside. Already from the exposition where Jubei is attacked by two assassins on the bridge, but simply throws his rice cake in the air, eliminates them and catches his cake just in time to continue his journey, does the movie establish it's unusual charm in the manner of Leone's films. Some of the "8 Devils from Kimon" are truly way over-the-top, like the one who uses hornets coming out of his back (!) to attack the three heroes, and Kawajiri doesn't always hit the right note or show a equal sense for directing quiet dramatic moments as well as the loud ones, but fluent structure, sharp style, inspired adventure mood and a great finale where the weaker Jubei manages to beat the invincible bad guy Gemma on the ship (it would be a shame to spoil it - sufficient to say gold is involved) manage to elevate the film to a good achievement, not a cheap trash.