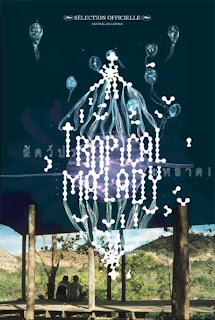 Keng is a soldier patrolling around the jungle. One day he meets Tong, a local villager working as the ice cutter. The two of them meet again while their bus and truck stop on the street. They become friends, and slowly gay lovers. They visit the cinema, an underground temple recommended by a woman and drive around with the motorcycle...A man killed the tiger shaman, disguised as a woman, and it's ghost wonders around the jungle. A soldier gets lost in the jungle, becoming hunted by the ghost in the form of a naked man. A monkey advises him to kill the ghost or he will be consumed by it, so he shoots it.

"Tropical Malady", winner of Jury Prize at the Cannes festival, is a surreal two-part film that can probably best be compared with it's mythical-traditional tone to Pasolini's "The Flower of 1001 Nights". It's a daring minimalistic film made out of two stories that's more concerned with mood and intuition than standard straight-forward narration and logic: the first story, revolving around two gay men, is good, but the second, a fantasy one, is truly fantastic and elevates the film into artistic heights. In the first story, neat little details, quiet style and lingering mood demand a lot of patience from the viewer, and although it doesn't satisfy to the fullest one has to be impressed by it. The story introduces the daring gay theme as completely normal, acting like some sort of gentler Thai version of "Brokeback Mountain", and little humorous touches, like in the scene where Keng puts his hand on Tong's knee in the cinema but he jokingly captures it by putting his other leg on it like a jaw or the one where Tong's mother finds Keng's love note in his pants that she was washing, are nice.
But the second story, that turned into fantasy, is truly unique and more fascinating: an hour long episode in which a soldier is lost in the dark jungle and hunted by a tiger shaman's ghost, realised almost without any dialogues, stimulates the dormant senses and is a pure, introverted, experimental delight. Scene after scene, director Apichatpong Weerasathekul crafted a subconscious jewel, telling everything with hypnotic images (a soldier walks in the jungle at night, a monkey "talks" with him with subtitles, the ghost throws the soldier down the hill and the subtitles say: "Strange feelings got the hold of the soldier", a spirit of a dead cow rises from it's dead body, a tree enlightened in the night...) that won't be understood by everyone because it's derived of any interpretation, but a one that gives a lot of attention to the magic of simple nature. If there was ever a film that got as close to capturing the feeling of meditation that transforms the viewer's consciousness into Nirvana, it is shining "Tropical Malady".