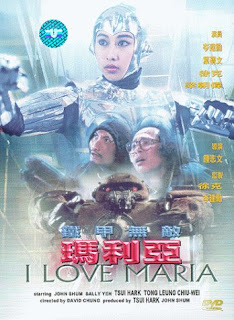 Journalist Terry witnesses an attack of a 10 foot tall robot that robs a bank while the police is left powerless. The robot returns to it's crime gang, called Robogang. Police scientist Loony, a nonchalant person with glasses and too long hair, saves the life of a guy called Whisky in a bar. Since Whisky is a former member of Robogang, the police is now chasing them both so they hide in a forest. Loony reprogrammes a female android called Maria, that once worked for Robogang, to now work for them. Still, the police arrests them. Terry manages to release them and they, together with Maria, destroy the Robogang and their giant robot.

Wacky cult Hong Kong Sci-Fi comedy "Roboforce", somewhere also titled as "I Love Maria", too obviously copies the American ideal "RoboCop" from whom it even stole a few sound effects, but all in all it's still a word of a neat, charming and amusing work of trash. Besides the appearance of famous Chinese director and producer Tsui Hark ("Time and Tide"), who never had any problems to dive in into an exotic side of cinema, as the drunk protagonist ironically called Whisky, there is also the funny John Sham in the role of the clumsy scientist Loony and Sally Yeh as the female android Maria. Considering that during the course of the film only two mechanical creatures show up, android Maria and a 10 foot tall robot (realized in a very clumsy manner as a giant puppet), one needs to give compliments to a few suspenseful situations. The gags are mostly childish, in accordance with the whole campy mood of the "anything goes" story, but some of them are good, like in the sequence where the android woman is demolishing whole walls of a building but can't kill the drunk Whisky who by pure chance dodges all of her attacks or when 8 criminals are swinging on the vines in the forest and shooting at the person whom they are chasing after. Sally Yeh truly is permitting herself everything in this film, from a protagonist using her android body as a surfboard up to them abrading her metallic butt, but there is too many nonsense, naivety and illogicality present to lift this obscure film anything above a "guilty pleasure".